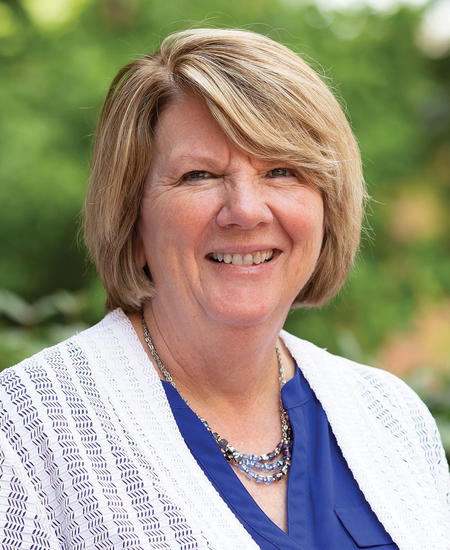 There’s a reason faculty retire long after they can. We like our jobs!

Kim Anderson admits that when the 1990 faculty photo was taken, she took pains to make sure she couldn’t be missed.

Not only is Anderson—then assistant professor Kimberly Ward— prominent in the photo due to her physical location, she captures the eye for a different, less immediately tangible reason. Anderson is the only female in the photo.

“When I interviewed at UK, I just assumed there were women on the faculty. The first time I realized there weren’t was when I walked into a faculty meeting and thought, ‘Wait a minute. I’m the only female here!’”

For Anderson, such asymmetry was nothing new. But to really tell the story, we have to go back to the 1960s and a 124-acre farm in East Palestine, Ohio. That’s where Anderson, the youngest of six children, learned hard work and the priority of family.

“My dad went to college for a couple of years before fighting in World War II. Later, he kept the books at a furniture company. My mother was a waitress. So, financially, we were not so well-off. When I wanted a prom dress, my dad sold a cow.”

In high school, Anderson became involved in the Future Medical Careers Club and was considering a career in nursing. Even though her parents did not have a lot of money, Anderson knew her mom and dad always put their children first and would make sacrifices to ensure she could go to college. One day, however, Anderson discovered that LW Nash, a local manufacturing company, offered a full-tuition scholarship to study engineering at nearby Youngstown State University.

Anderson didn’t know anything about engineering—what it was or what engineers did—but she didn’t care.

“I thought, ‘Well heck, if they’re going to pay for my education, I’ll apply.”

As she sat in LW Nash’s waiting room, preparing for her scholarship interview, Anderson became aware that all of the other applicants in the room were male. As she walked into the conference room, she noted that all of the interviewers around the table were also male. Her work was cut out for her. Still, despite knowing nothing about engineering, Anderson made her pitch for why LW Nash should award her a scholarship to study it. And she must have been convincing, because she won.

Anderson laughs, relishing the story she has told numerous times over the years. “I got into engineering entirely by accident.”

So that’s how a young woman who is now in her 31st year of teaching chemical engineering at UK; who is the college’s associate dean for administration and academic affairs; who has won umpteen awards at the department, college, university level and beyond and who has served as a role model for numerous other female students pursuing engineering overcame long odds and won an engineering scholarship. Anderson enrolled at Youngstown State the next fall and commuted back and forth from the farm.

“Because they didn’t have to pay for my education, Mom and Dad bought me a yellow Volkswagen Beetle for $1,000. Every morning, and sometimes in six inches of snow, I would travel 30 miles to get to my classes. The car had no heat and no air conditioning, but I never missed a day of class.”

Once again, she found herself strangely alone.

“My first undergraduate course was a drafting class, and I was the only female. I didn’t like the subject and thought many times about quitting. But thank goodness I had Mom and Dad. With their encouragement, I stuck with it”.

Overall, Anderson says YSU was a great school that trained students to become productive engineers. However, Anderson continued to have an interest in the medical field and was not convinced she was ready to start a career as an engineer. Fortunately, as a junior she attended an American Institute of Chemical Engineers meeting, where she met Rakesh Jain, a faculty member from Carnegie Mellon University. Jain convinced Anderson to attend Carnegie Mellon for graduate school and do cancer research with him. Anderson was very intrigued by Jain’s research and agreed to join his group.

“Before I met Dr. Jain, I never realized that engineers could do research in the medical field. In addition to providing superb training in cancer research, Dr. Jain knew I was interested in teaching, so he let me teach some of his classes. I loved it.”

As she finished her postdoctoral studies, Anderson’s love for teaching and research led her to pursue an academic position. But where? Jain directed her to Johns Hopkins, Princeton and other big-name institutions that prioritized research over teaching. Although not an Ivy League school, the University of Kentucky College of Engineering also had an opening.

Anderson had never been to Kentucky. She applied anyway.

“I loved the fact that there was a medical center here on campus, as well as the Markey Cancer Center. People were supportive and friendly, and I felt much more comfortable here than I did at those other schools.”

“It made me want to go to UK even more.”

She arrived in 1987, pleased to find an environment that supported research and teaching. Soon after arriving, she met her husband, Richard, who had graduated from UK with a degree in chemical engineering in the 1970s, at an alumni luncheon. Before long, Anderson established herself at UK as a professor, wife and mother to Richard's children, Stacey and Jon.

True, she quickly discovered there were no other women on the faculty, but it wasn’t long before that began to change.

“In 1990, Tom Lester became dean of the college. He made increasing the number of females on the faculty a high priority and that was a big relief to me. The landscape really changed because of Dean Lester.”

Anderson’s major research theme has been how cancer spreads in the body, specifically how cancer cells adhere in blood vessel walls and how that adhesion plays a role in cancer’s ability to spread. Along the way, she has collaborated with others in the college on projects pertaining to drug delivery systems and hydrogels for treatment. From 2007 to 2014, Anderson served as director of the National Science Foundation’s Integrative Graduate Education and Research Traineeship (IGERT) program, a $3.2 million award that focused on bioactive interfaces and devices.

The IGERT program led to additional funding from the National Science Foundation to support a Research Experience for Undergraduates (REU) program in the same area that Anderson has been directing along with chemical engineering professor Zach Hilt for the past 10 years.

Although she had developed a prolific research lab, Anderson discovered she actually enjoyed administration. In 1996, as an associate professor, she accepted the position as associate dean of administration and academic affairs. While she enjoyed administration, she chose to return to the faculty when her term ended in 2000 to pursue her promotion to full professor. Thirteen years later, then-dean John Walz invited her to take up the office once again.

“I was ecstatic, because I had really enjoyed being in the position years earlier.”

But the job had changed significantly. Whereas during her first term Anderson had been able to administrate, teach and run a research lab, the associate dean’s workload had grown to where something would have to be relinquished. If it hasn’t been made clear by now, it wasn’t going to be teaching. Anderson began making plans to slowly shutter her lab.

“I had a few graduate students who were close to graduating and thanks to collaborative work we were doing with Tom Dziubla and Zach Hilt, I was able to see them through.”

While teaching UK101 and a chemical engineering course keeps Anderson connected to the engineering student’s experience in the college, she’s also gained valuable insight about UK from a different vantage point: a mother's. Anderson’s son, Zack, graduated with a bachelor’s degree in computer science in 2017 and finished his MBA through the college’s Engineering/MBA dual degree program this spring. He began working in cybersecurity at Northrop Grumman in August.

“When Zack came here, it gave me a different perspective. He would express excitement and frustration, and I heard them as a mother and as an associate dean.”

Anderson says Zack’s decision to come to UK adds a dimension of credibility to her message when meeting with parents of potential students.

Zack’s graduation and new career have presented Anderson with opportunities to reflect on her future. She has three years remaining in her current term as associate dean. She supposes she will retire eventually, albeit reluctantly, whenever that day comes.

“There’s a reason faculty retire long after they can. We like our jobs!”

One last note about LW Nash, the manufacturing company in East Palestine, Ohio, mentioned earlier: One year after giving Anderson a scholarship to study engineering, the company suddenly went out of business. Normally, a student like Anderson would be out of luck and have to figure out how to finance the remainder of her education herself.

Instead, the company issued her a check for the rest of her tuition. The rest is history.