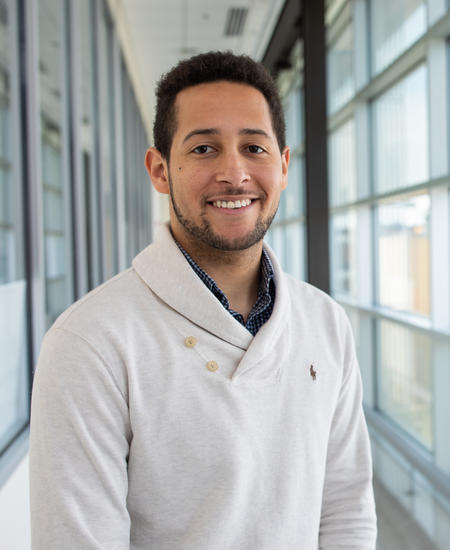 Hudson first became interested in computer science when he took a class on web design in high school. “I became kind of obsessed,” Hudson said. He joined Google’s Computer Science Summer Institute program, where he learned coding languages like Python.

Hudson graduated with his bachelor’s degree in computer science from Northern Kentucky University in 2017. While an undergraduate student, Hudson worked as a teaching assistant and tutor for computer science courses. His love for working with computer science students inspired his decision to pursue his Ph.D. at the University of Kentucky. He hopes to become a professor at a university one day.

Since coming to UK in 2017, Hudson has started the Graduate Student Association for Computer Science (GSACS) to combat the isolation that graduate students commonly experience in computer science programs across the world. “Sometimes we spend so much time in the lab alone because we are so focused on our research,” Hudson said. “It can lead to loneliness and serious mental health issues. I wanted to establish a social group where graduate students could form connections with each other outside of the research lab.”

GSACS was founded in 2020 and grows each semester. It now organizes social events, like game nights, and professional development events, like alumni panels. “I am looking forward to being invited back to an alumni panel and seeing how the organization has grown,” Hudson said.

Hudson conducts research in Assistant Professor Hana Khamfroush’s NET-SCIENCE Lab where he focuses on resource management and machine learning, also known as artificial intelligence. “I love that computer science is so eclectic,” Hudson said. “You can study so many different things through the lens of computer science.” Hudson specializes in edge intelligence for smart city applications.

“In a nutshell, what I focus on is trying to design systems to make AI more accessible and effective,” said Hudson. “The AI base is very big and it’s growing year after year. How do we transform that data into meaningful knowledge?”

Hudson hopes to inspire others to pursue computer science, even if they don’t look like the stereotypical computer scientist. As a Black member of the LGBTQ+ community, Hudson is passionate about representation within his field. “I know how much visibility matters,” he said.

Hudson is in the final year of his Ph.D. program and will graduate with his doctorate this May. He will complete a postdoctoral fellowship at the University of Chicago with Ian Foster, the Arthur Holly Compton Distinguished Service Professor of Computer Science, and Kyle Chard, a research assistant professor in the department of computer science. There, Hudson will work with Foster and Chard at the Globus Labs research group.