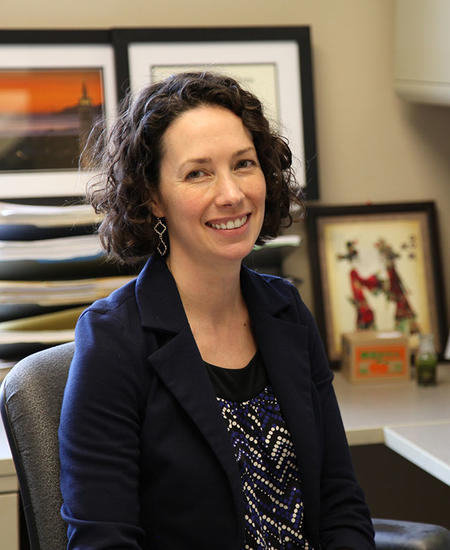 What we ultimately want is get these tools into the hands of doctors to influence how people are eventually treated for these various diseases.

What does mechanical engineering have to do with what’s inside your body?

Christine Trinkle, an associate professor in the Department of Mechanical Engineering, embraces the intersection of these two fields.

One of her current research projects is called “Lung on a Chip.” She and her collaborators are working to create devices that possess the same breathing mechanism found inside the body but in a miniaturized version that consists primarily of living cells. This differs drastically from the typical procedure. Currently researchers test treatments for various diseases, such as cystic fibrosis, asthma and lung cancer, on petri dishes.

Why is this problematic?

“It’s a slab of cells that have been grown on stiff, plastic material. When you take away the appropriate stimulus of a living and breathing mechanism, the cells actually don’t behave correctly. You’re trying to learn how the lungs work and how they respond to drugs based on lung cells that aren’t behaving like lung cells,” explains Trinkle.

The ability to test potential therapies in a more accurate environment will result in more precise medical treatments, such as specific development of pharmaceutical drugs. Additionally, it will also increase fundamental understanding of lung injury: if someone is put on a mechanical ventilator, which forces air into the lungs, how will the lungs respond? If lung cells are injured, how will they repair themselves, and what can we do to improve the recovery process? In the future, doctors will be able to formulate better answers to these critical questions.

“Many lung injuries can progress in really nasty ways, so understanding how to most effectively aid the recovery process, it will help the lung repair itself in a more timely manner, which can improve the outcome of patients. That’s what we’re looking for,” says Trinkle.

This research fits into her broader focus area, which she calls “Organ on a Chip,” or tissue engineering. She and her team blend engineering concepts, such as mechanics and fluidics, with biological basics, such as blood flow and cell movement. Their ultimate goal is to recreate internal environments outside the body so that treatments can be tested with greater accuracy.

Within this field, she and her team are working to develop vascularized microfluidic chips. The petri dish environment of typical studies contrasts with the constant blood flow within the body. Every cell in the body is less than half a millimeter away from some kind of blood flow, which brings cells food and oxygen, removes waste and CO2. None of this is captured in current tissue engineering processes. Trinkle’s team is working to build blood flow into these chips in order to recreate this fundamental aspect of a cell’s environment.

As Trinkle explains, this is a tricky tradeoff. Though several microfluidic-type projects are being developed around the country right now, the real challenge comes in doing this in a manner that people will actually be able to use. This practical outcome is essential.

“What we ultimately want is get these tools into the hands of doctors to influence how people are eventually treated for these various diseases,” says Trinkle.