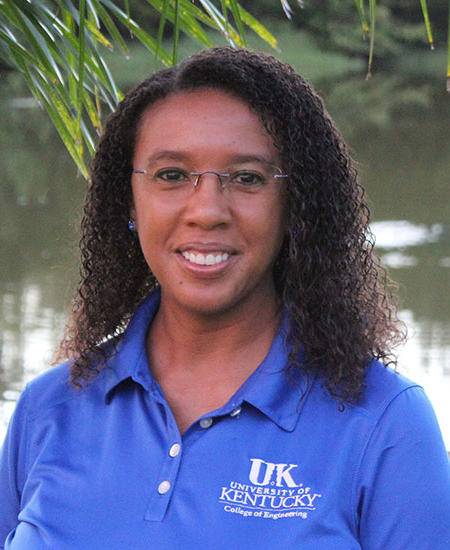 You need more than just the grades. You need to put into practice what you’re learning. That’s what makes the biggest difference when you’re out in the field.

When Renita Friese tells people about her job, she’s usually met with disbelief or strange looks.

Why? Because she designs lethal weapons.

The 1997 University of Kentucky College of Engineering mechanical engineering graduate now works as an engineering manager in the Ordnance and Tactical Systems business unit for General Dynamics (GD). Contracted by the federal government, the company supplies artillery and tanks to the U.S. Army, Navy and Marine Corps. For 15 years, Renita has designed warheads at a site in Niceville, Florida, and just transitioned to work in artillery in St. Petersburg, Florida.

“I design test assemblies and fixtures for large caliber weapons, which are 120 mm in diameter,” she says. “I previously specialized in warheads, and now I’m learning about all the different projectile components like propellants, cabling and fuzes.”

Renita also has many leadership roles. She prepares briefings, including weekly updates with federal representatives. She also leads many team projects, which she likens to her team-based classes at UK.

“Just like in college, you don’t get to pick the people you work with, and there’s always a deadline to meet,” she says. “You work late hours and do what you have to do. Experiences at UK trained me to have that endurance.”

“We often did arena testing, where we put a weapon in an arena and blew it up. We would then analyze fragment patterns to determine the weapon’s lethality,” she says. “Our job is to make sure that when our men and women go into battle, it’s not a fair fight.”

Her job has involved continual growth. While she earned a mechanical engineering degree, the weapons she works on involve the electrical and aerospace engineering fields as well.

“My education has and will continue,” she says. “That’s one thing you don’t realize when you get out of school. You’ll always be learning.”

As she reflects back on her days at UK, Renita most remembers the educational aspects that prepared her for the workforce. She began in her field through a co-op obtained at UK, and she encourages all students to gain some type of hands-on experience.

“You really have to start preparing for your job while you’re in college,” she says. “You need more than just the grades. You need to put into practice what you’re learning. That’s what makes the biggest difference when you’re out in the field.”