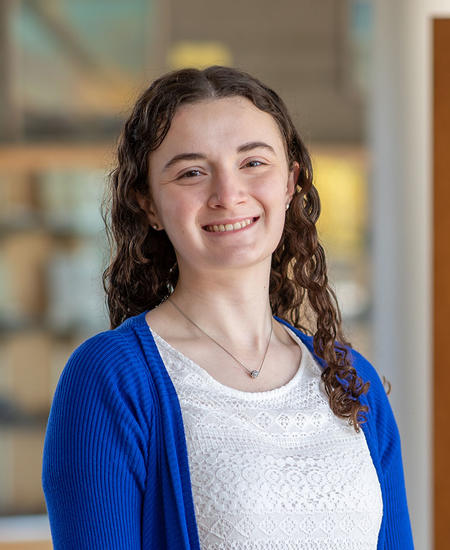 My scholarships help me not worry constantly about how I’m going to pay for college. The other schools I applied to didn’t offer nearly as much in scholarships, so that was a huge factor in coming here.

Senior mining engineering major Caroline Gerwig comes from a family of engineers—literally. Both parents and two older sisters became engineers, and Caroline is following suit through her education at the University of Kentucky. The jury remains out on her brother, who is in high school.

Although engineering runs in the Gerwig family’s blood, Caroline stands out as the only mining engineer.

“When my older sisters were looking at colleges, we often visited as a family. At Virginia Tech, a representative mentioned an area called mining engineering, and I thought, ‘That sounds cool.’

That was in sixth grade. Nine years later, Caroline hasn’t changed her opinion.

“Everything I learn about mining engineering makes it even more cool to me. You do a little bit each field of engineering—chemical, electrical, civil—all in one major. That’s what I always wanted to do.”

Hailing from southeastern Pennsylvania, approximately an hour from Philadelphia, Caroline found UK a better fit than in-state Penn State for two reasons. The first had to do with program options. Not only is UK one of 13 schools with a mining engineering program, it also offers a minor in dance.

“In my research, I was only able to find three schools with minors in dance, and UK was one of them. I’ve been dancing since I was two. I love it and I don’t want to stop doing it, and this was a great way for me to continue dancing.”

The second reason? Significant scholarship support. In addition to a couple of scholarships from UK and the Department of Mining Engineering, Caroline has also received a scholarship from the College of Engineering.

“Combined, they all help me not worry constantly about how I’m going to pay for college. The other schools I applied to didn’t offer nearly as much in scholarships, so that was a huge factor in coming here.”

That’s not to say Caroline doesn’t work, as many other UK students do during their time on campus. She served as a teaching assistant in the First-Year Engineering program and a research assistant for the department. But Caroline says there’s a difference.

To broaden her undergraduate experience even further, Caroline traveled to Finland in 2019 as part of a month-long program exploring smart technology in the mining business—another opportunity she could afford thanks to scholarship funds. That trip will came on the heels of her second summer internship with aggregates producer Martin Marietta, one that took her to North Carolina. Knowing she will likely receive occasional managerial responsibilities, Caroline looks forward to implementing lessons she learned in EGR190: Understanding Leadership.

“The leadership class helped me learn about communication and about how to improve myself so I can lead others no matter what position I have. Already I’m able to look at how I can improve my ability to help others.”

Thanks to UK scholarships, Caroline has been free to focus on what really matters to her: preparing to serve as an outstanding mining engineer and professor. May she never stop dancing.