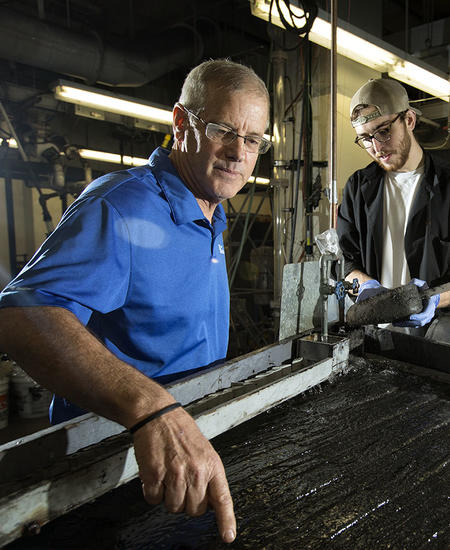 As the world’s population uses all of our rich deposits, I am trying to not only recover the waste, but going one step further by putting the waste to work.

“Since coming to the Center for Applied Energy Research in the mid-80s, I have focused on utilizing byproducts from industrial processes. It’s like recycling but recycling is using things over and over again, whereas what we’re trying to do is take a waste stream with no value, see if we can separate it into its usable components and ultimately create something of value out of something that was just waste.

Groppo’s mineral processing work began with fine coal that had not been recovered because the technology didn’t exist. Today, processing fine coal is common practice. Recently, Groppo has studied ways to apply byproduct utilization processes to carbon dioxide (CO). Rather than capturing CO2 in order to sequester it, Groppo’s projects involve using microalgae to capture the CO2 and then produce biofuels and bioplastics from the recovered algae. Wherever the default is to throw refuse away or dispose it into a permanent landfill, Groppo ponders: Can we separate it? If so, can we profitably use some of the components to pay for the process and minimize the amount we have to pitch?