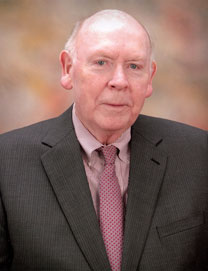 What do Roosevelt (Red) Maynard, Jr. and a Ford F150 pickup truck have in common? Both are versatile, hard working, popular, and known for their longevity.

A native of Inez, Kentucky and a graduate of Inez High School, Mr. Maynard had an affinity for all things mechanical, and spent his summers during college working as a machinist. After three years at Morehead State University, he enrolled at the University of Kentucky, graduating with a Bachelor of Science in Mechanical Engineering in 1958. He taught high school math at Inez for a year while his wife finished her master’s degree, and then he began work at the Ford Motor Company in 1959. He later earned an MBA from The University of Michigan in 1968.

Over the course of 37 years, Mr. Maynard helped drive the success of Ford Motor Company while using skills he learned at UK to put the auto giant – and his career – into high gear.

From the classic Mustang to the ubiquitous Taurus, Mr. Maynard powered Ford with his relentless pursuit of the perfect powertrain, design, development and manufacturing productivity. A skilled leader, his first management role came in 1973 as the manager of the advance transmission new concept department. Over the years he managed many engineering departments and manufacturing plants at Ford and he learned a lot about how cars were made. But most importantly, he learned what it took to get things done.

Mr. Maynard developed a special expertise in reviving poor performing groups into high productivity, low cost, high quality, and motivated groups. In 1991 Ford was enjoying considerable success and “Quality is Job 1” had become more than a slogan. Ford was interested in finding ways to continue the improved performance. Mr. Maynard had already implemented a suggestion program in his area, engine manufacturing development operations. He was asked to spend his final three years at Ford designing, launching, and managing a new program for the company.

Mr. Maynard chaired the international committee that designed, developed, obtained Chairman of the Board approval, and implemented this program worldwide. The program, Ford’s Continuous Improvement Recognition System, saved Ford over one billion dollars during the three years that he was program director from 1992 to 1995.

After retiring from Ford in 1995, Mr. Maynard founded Maynard Performance Management Company, supplying businesses with consulting services in management and leadership training, empowerment, motivation, interpersonal relations, conflict resolution, and corporate change. He researched, designed, and copyrighted the Performance Empowerment Recognition Systems (PERS), which empowers employees to take actions they know will result in cost savings, improved quality, and productivity. The PERS process was implemented at Budd and Eaton Corporation plants throughout Ohio, Indiana, and Missouri, with an average savings per employee ranging from $1,000 to $4,000 each year.

From 2002 to 2004, Mr. Maynard served as the membership division director for the Society of Manufacturing Engineers (SME), managing a $10 million annual budget and a staff of 30 that served 38,000 members in 70 countries. He is a current member of SME. His remarkable career included two automotive automatic transmission patents. What’s more, a full chapter of Dr. Robert P. Mai’s book, Learning Partnerships, was devoted to Mr. Maynard’s success at Ford Motor Company. The chapter was titled, “Prompting Change at Ford: A Blueprint for Organizational Learning.”

Mr. Maynard and his wife, Marilyn, reside in Lexington. They have two sons and one grandchild.