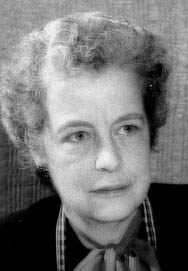 Miss Margaret Ingels came to the University of Kentucky from Paris, Kentucky, hoping to pursue a degree in architecture. Fortunately for the engineering profession, there was no degree program in architecture at UK at that time and Dean F. Paul Anderson persuaded her to pursue a degree in mechanical engineering as “the next best thing.” She was the first female engineering graduate from this institution when she received her Bachelor of Mechanical Engineering in 1916. Miss Ingels was also the second woman engineering graduate in the United States and the first woman to receive the professional degree of Mechanical Engineer.

Following graduation she worked for the Chicago Telephone Company in the traffic engineering department. She left Chicago in 1917 for Pittsburgh and the Carrier Engineering Corporation where her interest in “conditioned air” began. She received the Mechanical Engineer professional degree in 1920 and the next year she joined the American Society of Heating and Ventilating Engineers research lab where she studied air conditioning for six years. In 1931 she returned to Carrier-Lyle Corporation in Syracuse, New York . That same year President Hoover invited her to Washington to attend the President’s Conference on Home Building and Home Ownership. She remained with Carrier until her retirement.

She was a spokesperson for the profession, speaking to more than 12,000 people during more than 200 speeches from 1932 until 1952. In 1940 she was selected as one of 100 women in the United States who had successful careers in fields not open to women in 1840. Miss Ingels received an Honorary Doctor of Law degree from UK in 1957 and was selected as a University of Kentucky Distinguished Alumnus in 1965.

In her speech “Petticoats and Slide Rules”, given before the Western Society of Engineers in Chicago on September 4, 1952, she recounted the women who had preceded her and followed her into engineering. Her message is still an inspiration to women in engineering.

“The woman who joins the procession of engineers today, tomorrow, and tomorrow’s tomorrow benefits by a rich heritage bequeathed to her by (those who came before). She assumes automatically the responsibility to further prove that petticoats and slide rules are compatible, and she must not carry the responsibility lightly. Her task is to widen the trails blazed for her–and more. She must build them into great highways for women engineers of the future to travel, free of prejudices and discrimination.”

A new dormitory named Ingels Hall opened in August 2005. It is a living-learning community and includes specialized programming for a cluster of female engineering students living in the Women in Engineering Wing.