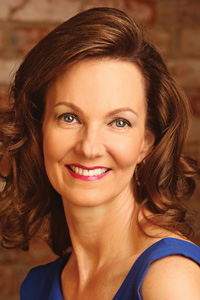 If Karen Maxwell’s Delta Zeta sorority sisters couldn’t find her, they intuitively knew where to look: in the University of Kentucky’s computing center at McVey Hall. For her first three years of college, she completed her computer science projects using punch cards and spent many hours in the computer center. She later earned her Bachelor of Science degree in computer science in 1985.

Although she never lost her interest in computing, today Maxwell is a business owner and philanthropist. She is co-founder and managing partner of KJMM Capital Partners, a real estate investment company. She was also founder and president of a design and decorating LLC. Maxwell began her career at First Security Bank in Lexington as a programmer/analyst in Management Systems.

Upon relocating to Washington, D.C., she was a civilian software consultant for the Pentagon’s Military Sealift Command. Maxwell later joined MCI Communications (currently Verizon) as a project manager in billing and human resource systems. After leaving Washington, D.C. for Ithaca, New York, Maxwell took a position in Cornell University’s Institute for Social and Economic Research. While at Cornell, she was certified in Statistical Analysis Software (SAS).

Maxwell’s career later took her to Cincinnati, Ohio, where she managed Target Marketing Systems for Federated Department Stores (currently Macy’s). Following her time at Federated, she returned to the logistics field at Procter & Gamble as a senior IT consulting manager for the Health and Beauty Care division.

Desiring to spend more time with her family, Maxwell resigned from P&G and started her businesses. At the time, her impressive IT career with leading companies in major-end markets had included government, retail, banking, manufacturing, telecommunications and education.

Maxwell now spends her time in Kansas City, Missouri and Vail, Colorado. She is active in both communities with several philanthropic endeavors. In Kansas City, she volunteered at the Kansas City Ronald McDonald House for five years and is a member of National Charity League and the Young Matrons. In Colorado, she serves on the grant making committee for the Women’s Foundation of Colorado and chaired Vail’s 2018 annual fund raiser.

Maxwell currently serves on the advisory board for the Department of Computer Science at UK, and has established three scholarships for female students majoring in computer science. She is a member of the Kansas City UK Alumni Club.

Maxwell’s husband, John, received a bachelor’s degree in mechanical engineering from UK in 1986. They have two adult daughters.