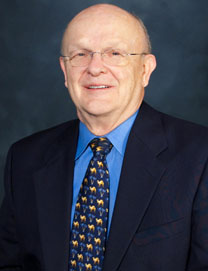 The University of Kentucky has launched thousands of successful careers. But how many of its graduates get to launch astronauts? Ask Dick Lyon and he will tell you that his has been a fairytale career in doing just that.

A native of Middlesboro, Kentucky, Mr. Lyon earned a Bachelor of Science in Mechanical Engineering from the University of Kentucky in 1958. At UK, Mr. Lyon was a member of the American Society of Mechanical Engineers, Pi Tau Sigma, Tau Beta Pi and the UK track team. Upon graduation, he began his aerospace career in North Carolina, working on ground-to-air missile defense systems for Western Electric.

In 1962, he moved to Florida and became a project engineer for Honeywell on guidance systems for defense missiles. Two years later he joined NASA as a Kennedy Space Center (KSC) civil servant. This was the beginning of a 34-year career at KSC; 17 of which were in leadership positions as a senior executive.

His first position with NASA was planning and managing the layout of servicing equipment for the Apollo and Lunar Module spacecrafts at the launch complexes. In this role he worked directly with NASA icons such as Dr. Werner Von Braun to obtain certification of ground systems designs. He also worked with the Apollo astronauts to familiarize them with the mobile launchers and pads. As project manager for Apollo’s space nuclear power and lunar surface experiments, he developed ground breaking policy for handling and launching nuclear materials on human launches at KSC.

In the early 1990s, he became program manager for the space station. In that role he was credited with the foresight to develop and build KSC’s space station processing facility, a state-of-the-art facility that enabled the integration and validation of all the space station major elements which were built in locations around the world. This has proven to be a major NASA asset, uniquely supporting the most complex space construction project in the history of human space flight.

Throughout his illustrious NASA career, Mr. Lyon frequently represented KSC as a speaker at local, national, and international events; he was even featured in a Nickelodeon TV production on the space station. He worked directly with the Atomic Energy Commission and was among those who briefed President Jimmy Carter and the seven original Mercury astronauts during their visit to KSC. Mr. Lyon retired from NASA in 1996 as the director of KSC shuttle orbiter logistics.

Upon retirement he continued serving NASA as a contractor with Dynacs Engineering Corp. Currently, he works as vice president and leader of ASRC Aerospace, supporting NASA in the design and development of KSC checkout and servicing systems and is an agency leader in the development of new technologies.

He is the recipient of numerous awards including the Exceptional Service Medal, the Outstanding Leadership Medal, the Equal Opportunity Medal, and the Atomic Energy Commission Certificate of Commendation. In April 2009, Mr. Lyon was the 20th recipient of the prestigious Debus Award in recognition of his significant contributions to our nation’s space program.

Mr. Lyon and his wife, Katherine, live in Cocoa, Florida. They have two children and four grandchildren.