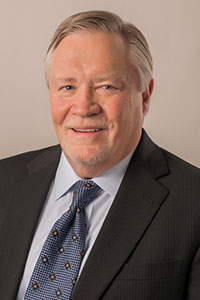 By keeping his head down and focusing on leveraging his executive talents, Gordon S. “Stonie” Glenn spent over 35 years transforming small but promising businesses into highly profitable, publicly traded companies.

Glenn was born in Princeton, Kentucky, and graduated from Caldwell County High School in 1966. He studied mechanical engineering at UK, where, in his senior year, he was chosen to join Pi Tau Sigma, the international honor society for mechanical engineers. Glenn was also a member of the Sigma Alpha Epsilon fraternity, where he made many lasting friendships. As part of the Class of 1970, he interviewed with Unisys Computer Systems on campus during which he first heard the term “software.” After researching computers and programming, Glenn decided to join Unisys and moved to the Washington DC area.

Following a brief stint with Unisys, Glenn joined start-up systems integration firm Computer Data Systems, Inc. (CDSI) as a junior programmer. He rose through the ranks over a 25-year career there and served as president and CEO for the last eight years. When the company was acquired in 1997, it had grown into a $350 million in revenue, NASDAQ- traded software, integration and outsourcing company.

After CDSI, a small healthcare transaction processing company named SXC Health Solutions, Inc., recruited Glenn to be its chairman and CEO. Over the next 10 years, Glenn expanded the company into a major healthcare IT and pharmacy benefits management company that offered a wide range of clinical, professional and processing services primarily for managing pharmacy benefits, adjudicating healthcare claims and automating prescription drug dispensing. Under Glenn’s leadership, the company grew to a NASDAQ-traded $1.5 billion enterprise at his retirement in 2009.

Shortly after retiring, Dean Larry Holloway invited Glenn to join the Engineering Dean’s Advisory Committee. Glenn also serves on the advisory board for a healthcare technology and biotech fund managed by Roadmap Capital in Toronto. Until recently, he was a member of the board of directors and chairman of four information technology companies. Glenn is currently a volunteer with Tom Coughlin’s Jay Fund Foundation, which provides financial and moral support to families with kids battling cancer. He is also a weekly volunteer for the Jacksonville, Florida Mayo Clinic and Hospital.

Glenn is married to Christine Durham and has three sons and two grandsons. He and his family reside in Atlantic Beach, Florida.