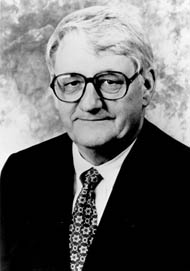 Gerald “Gerry” L. Nichols was a native of Louisville, Kentucky. He received his Bachelor of Science in civil engineering in 1958 from the University of Kentucky, and later earned a MBA from the University of Louisville. He also completed additional studies at Northwestern and McGill Universities. Mr. Nichols was a veteran, having served as an officer in the U.S. Army Corps of Engineers in the Pacific and completed military studies at the Presidio. He returned to active duty during the Berlin Crisis.

Mr. Nichols joined the engineering department of the Louisville & Nashville Railroad in 1959. He managed the design and construction of Louisville’s Osborn Yard, a major classification center for rail cars. In the ensuing years, he compiled a stellar record in a number of operations and staff functions, culminating in involvement on the team that created CSX Corporation, a Fortune 500 company headquartered in Richmond, Virginia. In 1980, he was elected vice president and executive assistant to the Chairman of the Board and President, CSX Corporation. He was elected senior vice president in 1984 and was part of the task force that merged the Chessie and Seaboard System Railroads that created CSX Transportation Inc., Jacksonville, Florida.

In 1995, Mr. Nichols was named executive vice president and chief operating officer of CSX Transportation, which at the time had 29,000 employees and providesdrail transportation and distribution services over a 18,800 route-mile network in 20 states, the District of Columbia, and Ontario, Canada.

Mr. Nichols died March 17, 2017 and is survived by his wife, the former Jacqueline Wilson and their two children.