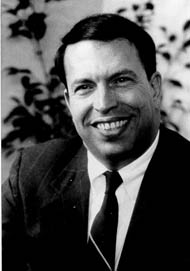 Since receiving his Master of Science in Electrical Engineering from the University of Kentucky in 1966, Eliott D. James has distinguished himself in a number of engineering and management positions with several of the nation’s leading technical corporations. As a group executive with Harris Corporation, he was responsible for multiple divisions including distributed data processing, interactive terminals and word processing. He was a corporate officer and president of Xerox Information Systems Division, and president and chief executive officer of Quintus Computer Systems, Inc., a leading supplier of software development tools. In 1989, he became president and member of the Board of Directors of Intergraph Corporation. Intergraph, a Fortune 500 corporation, is one of the world’s largest companies dedicated to the development and manufacture of interactive computer graphics systems. Mr. James has been instrumental in the development of a university program in which Intergraph gives millions of dollars in computer graphics systems to universities in the United States.

Mr. James has served as a member of the technical advisory board for the Microelectronics Computer Corporation and as board member of the Southern Methodist University Foundation for Science and Engineering. He has been active in community activities through the Leadership Circle of Giving and the United Way of Madison County, Alabama.

Mr. James was inducted into the College of Engineering Hall of Distinction in 1992. He and his wife, Joanne, now reside in Indian Harbour, Florida and Mr. James is a Managing Partner with Technology Strategies & Alliances.