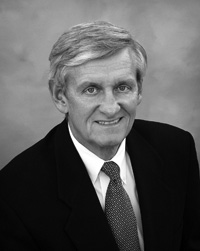 Having a vision of success is usually essential to achieving that success.

Deane Blazie not only had a vision – he has brought vision in the form of opportunity to many during his distinguished career. He founded and led two companies that became world leaders in producing low-cost computing devices for the blind.

A native of Detroit whose family moved to Frankfort, Kentucky when he was six, Mr. Blazie entered the University of Kentucky in 1964. He served as president of Tau Beta Pi honor society and president of the Engineering Assembly his senior year. He was elected to Eta Kappa Nu, the International Honor Society for Electrical Engineers.

He also found time to serve as president of the ham radio club, continuing an interest that changed his life. While attending a meeting of a ham radio club as a high school junior, Mr. Blazie met and became friends with a club member who was blind. Mr. Blazie did chores around the house for his friend throughout high school and college. The blind friend’s talent for invention and Mr. Blazie’s own creativity and engineering skills proved to be a powerful combination. As Mr. Blazie recalls, “He would think of problems to solve and I would help to engineer a solution.”

Mr. Blazie graduated in 1968 with a Bachelor of Science degree in electrical engineering. After serving in the Army, he stayed on as an engineer at the U.S. Army Human Engineering Laboratory in Aberdeen, Maryland. During that time, he completed work on a Master of Science degree in computer science at the University of Delaware, and received that degree in 1976. That same year, he was named one of the Ten Outstanding Young Men in America, an award given annually by the U.S. Junior Chamber, better known as the Jaycees. His nomination came from his design of a calculator to be used by the blind, using a unique audio tactile display. Others on that 1976 list of Ten Outstanding Young Men were former U.S. Senator Bill Bradley, Vice President Dick Cheney, and University of Oklahoma President and former Oklahoma governor and senator David Boren.

Rounding out a year of great success, he also co-founded Maryland Computer Services in 1976. The company specialized in software design for businesses. But with Mr. Blazie’s interest in problem solving for the blind still strong, MCS also designed and marketed the first synthetic speech device for the blind – the Talking Telephone Directory. That device and others led to greater involvement in a field that was so new, MCS was actually involved in creating it as problems and opportunities arose. MCS became the world’s largest manufacturer of synthetic speech products and Braille printers. The company was sold to Enabling Technologies Company in 1986. Later that same year, Mr. Blazie moved on to his next challenge.

Mr. Blazie’s contributions to improvements for the blind and his business success have been widely recognized. He was a winner of the Johns Hopkins First National Search for Devices for the Handicapped; he was the first winner of the Winston Gordon Award from the Canadian National Institute for the Blind. He was named 1990 Humanitarian Entrepreneur of the Year by Ernst & Young, Merrill Lynch and Inc. magazine; and the National Federation of the Blind presented him its Golden Keys Award for Research Excellence.

Blazie Engineering was sold in 2000 to investors to form Freedom Scientific, Inc., which is headquartered in St. Petersburg, Florida.

Mr. Blazie is retired, but still active as a consultant to numerous organizations of the blind, and serves on several boards of directors, including those of the National Braille Press, the Jernigan National Research and Training Institute, and Advanced Science and Technology, Inc. He is also a committee member of the National Federation of the Blind.

Mr. Blazie and his wife, Marty, reside in Hobe Sound, Florida. They have three sons: Bryan, Chris and Stephen.