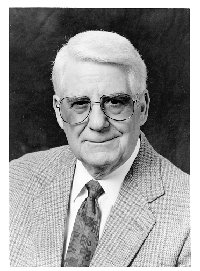 An Ohio native, Clyde R. Tipton, Jr. spent his pre-college years in Danville, Kentucky and received a Bachelor of Science and Master of Science in metallurgical engineering from the University of Kentucky in 1946 and 1947, respectively. Following graduation, Mr. Tipton joined the Battelle Memorial Institute as a research engineer. He quickly became an active member of the scientific research and development community. His initial assignment was the investigation of precision casting of high temperature alloys used in nuclear physics investigations.

During a stint at Los Alamos Laboratory, he focused his attention on the metallurgy of plutonium. As a result of his work on plutonium-aluminum alloys for reactor fuel elements, he is the co-holder of a U.S. patent. Returning to Battelle, Mr. Tipton rose through the management ranks in a variety of assignments. At the time of his retirement in 1987, he was a vice president of Battelle and corporate director of Communications and Public Affairs.

Recognized for his expertise in the areas of atomic energy, education and economics, Mr. Tipton was appointed by the governors of the states of Ohio and Washington to a number of working groups and advisory committees. He was a member of the U.S. Secretariat for the 2nd United Nations Conference on Peaceful Uses of Atomic Energy, and served as a consultant to the U.S. Atomic Energy Commission in the Atoms for Peace program in Japan, Brazil and India.

Mr. Tipton has contributed significantly to scholarship in his discipline. He was the Editor of the Materials volume of the 1955 edition of the Reactor Handbook. He is the author of two books, Learning to Live on a Small Planet (1974) and How to Change the World (1982).

A hallmark of Mr. Tipton’s career has been his involvement in and commitment to professional activities and service. He served the Ohio Society of Professional Engineers in various offices and capacities culminating with a term as President from 1990-91. On the national level, his involvement with the National Society of Professional Engineers has centered in the PEI Practice Division. From 1995-96, Mr. Tipton served as President of the NSPE.

In addition to his professional activities, Mr. Tipton has devoted himself to community service working with more than 25 civic, religious and charitable organizations over the years. Currently he serves on the Board of Directors of Episcopal Retirement Homes, Inc. and the Pilot Guide Dog Foundation.

Mr. Tipton has received a host of professional and personal accolades. The Ohio Society of Professional Engineers bestowed upon him its Outstanding Service Award (1993), the Award of Distinction (1983) and the prestigious Uncommon Man Award (1988). He was also made a recipient of an Award of Distinction from the National Society of Professional Engineers (1993). Mr. Tipton was also named an Honorary Alumnus of the United Negro College Fund for his work on behalf of that organization.