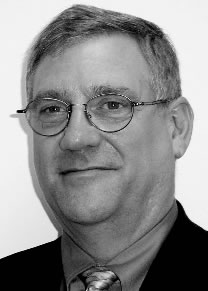 Cornelius James Starkey IV is known to one and all as Neil — and his accomplishments in engineering are equally well known and highly regarded.

After beginning his college education at Ashland Community College in 1967, Mr. Starkey, an Ashland native, served his country in the U.S. Army in Vietnam in 1969 and 1970.  He married Katharine Hood in 1971 a week after she graduated from UK.  Mr. Starkey worked as a disc jockey and broadcast engineer at WCMI and WAMX radio in Ashland.  He resumed taking classes at ACC in 1973 and transferred to the main campus in 1974, completing his Bachelor of Science in electrical engineering in 1976.

Mr. Starkey was a member of honor societies Eta Kappa Nu, Omicron Delta Kappa and Tau Beta Pi, which he served as president his senior year.  Also during his senior year, he joined Dr. Lee T. Todd, then an assistant professor, to form Cathodochromic Technology, Inc.  CTI was transformed to DataBeam Corp. in 1983 where Mr. Starkey served as executive vice president and chief technology officer until the company was acquired by IBM in 1998.

Mr. Starkey was named an IBM Distinguished Engineer in 2000 and currently leads the Strategic Technology Relationship Team for the chief technology officer of IBM Federal.  He has served in other leadership roles within IBM, including CTO of IBM Lotus Software in 2001 and 2002 and was elected to the IBM Academy of Technology in 2001.

Mr. Starkey continues to serve his alma mater as a member of the College of Engineering Dean’s Advisory Council and as an advisor to the Department of Electrical and Computer Engineering.

Neil and Katharine Starkey have a son Benjamin, also a University of Kentucky graduate.