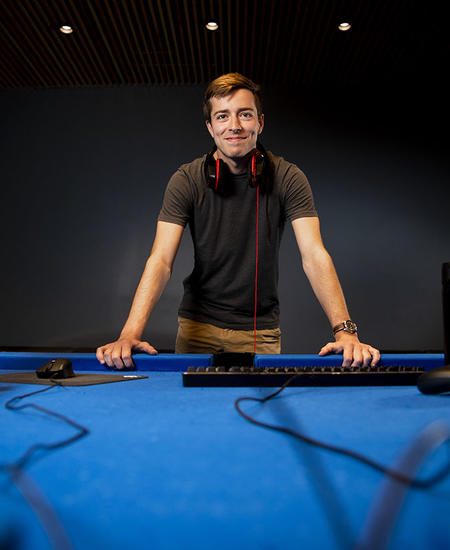 Some people go to the gym and that's their restorative habit. Gamers can't wait for the weekend because they want to fire up their game. It’s the same concept.

On October 21, 2019, the University of Kentucky announced a new partnership with international esports company Gen.G to build a unique, global gaming and esports program. The partnership will ignite academic, community and professional development relative to the gaming industry and create space for UK’s esports club in the Innovation Lab currently under construction at the corner of Winslow and South Limestone.

Wally Johnson, a senior civil engineering major, is president of UK’s esports club. We sat down with him to learn more about the new partnership, esports and myths about gamers.

How long has UK had an esports club?

The club was formed in spring 2017 by a computer science student named Steven Gripshover. He wanted to found the club because there were a lot of gaming clubs on campus but they were closed off from one another. Steven and I were brothers in the Triangle Fraternity and we played games together, so it was natural for me to join. We wanted to bring these splintered clubs together and create something that would have more longevity at UK.

You were elected president of the esports Club last spring. What do those responsibilities entail?

I'm the point of contact for anyone outside the club. That includes interested students, the university and any sort of company or platform that wants to engage with us. I also represent the club regarding anything involving funding. I guess the last thing I do is that I keep us in the loop. I've been going to all the meetings regarding the planning of the esports space, all the partnership meetings, and panels or talks with alumni or other universities. I try to keep us as well-rounded as possible.

How far-ranging are the games under the esports Club umbrella?

If there's an online, multiplayer game that somebody likes to play and there's a league for it, we will try to find them teammates by contacting other students and hopefully get them into the league. If they have a passion for it, we will find space for them to compete.

As for the games themselves, there's a pretty wide range. We have competitive card games, shooter games like Fortnite or Call of Duty. We have MOBAs (Multiplayer Online Battle Arena) like Heroes of the Storm or League of Legends. There are also sports games like Madden and NBA2K.

Does the esports Club put on any competitions or events?

Normally people participate in online leagues remotely, whether from their dorm room or apartment. But with the new space, we should be able to have everybody playing side-by-side in one room. That builds teamwork and makes for a better learning environment.

We host tournaments on campus. Students will bring in their own consoles or monitors and we'll set up a tournament for a particular game. We host Super Smash Brothers tournaments every month and get around 40 to 50 people to participate. The League of Legends finals are coming up, and we’re scheduling a watch party for that.

How do you see this new partnership with Gen.G benefitting gamers at UK or who want to come to UK?

I think the main thing is that it is going to make them feel like their hobby has weight. It gives them space to find where they belong at UK. Since we’re such a huge and diverse student body, that can't be overstated.

How do you see this partnership increasing community among gamers?

UK’s vision is to build a program that benefits students who want to get involved in esports not only as a student but also perhaps as a career path. That’s going to come from building a community of gamers--people with a common hobby of playing video games, whether by themselves or with others. It sounds simple but that's really all it is. You get to reach people with similar interests and a similar mindset in one place and show them there is a place for them here.

What is one myth about gaming and gamers you would like to bust?

A myth I would love to bust is that gamers aren't social; I just don't think that's true at all. At our club meetings, people surprise me all the time with stories about their involvement on campus. Gamers are definitely social creatures and when the new space is here, I think we'll see that even more.

Another myth is that gaming is just a time-waster. I think it's a good hobby. It gives me a space to find release. I don't really like sports that much and I'm not a big outdoors person. I really just like playing games. They exercise my mind and I like meeting people who like the same games as me. Some people go to the gym and that's their restorative habit. Gamers can't wait for the weekend because they want to fire up their game. It’s the same concept.

You’re a senior majoring in civil engineering. What do you plan to do after graduation?

I'm considering attending graduate school here at UK, where I’ll continue my focus on structures and design. Ultimately, I hope to do bridge design. I spent this past summer in Frankfort, Kentucky, drawing bridge plans and doing estimations. I really enjoyed my time spent there working on drawings.