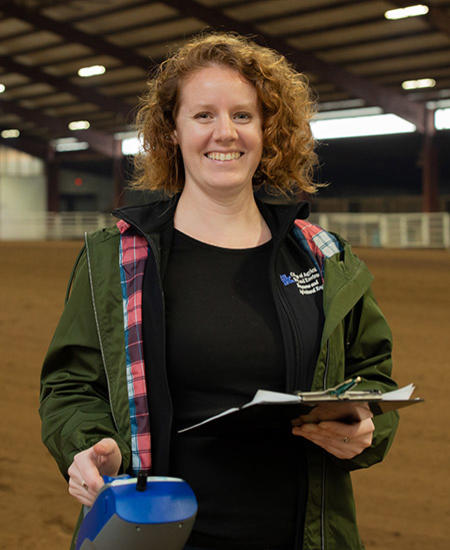 While anecdotal evidence convinced me that dust and moisture create environmental issues in these facilities, no one had ever pursued formal research to prove such problems exist.

As a high school student, Staci McGill knew exactly what she wanted to do with her life.

Steps one and two went without a hitch, but step three fell out of favor during Staci’s freshman year. A horse lover and avid rider, Staci became disenchanted with the prospect of vet life.

“The thought of riding around in a truck for hours upon hours was not for me,” Staci recalls. “I wanted to enjoy spending time with my own horses rather than training and working with someone else's all day.”

Fortunately, Staci’s agricultural biotechnology major left her with several career paths. Because the program prepares students to attend a professional school or graduate school, all agricultural biotechnology majors fulfill a requirement to do research as undergraduates. Staci learned what goes into the research process, worked in a laboratory, wrote papers and gave presentations. The rigor prepared her well for, first, a master’s degree in biosystems and agricultural engineering from UK, and now, her current Ph.D. studies in the same department. Advised by assistant extension professor Morgan Hayes, this equine enthusiast is exploring all aspects of indoor riding facilities.

“Indoor arenas are large, open structures filled with footing, which is a sand-based material that covers the floor,” says Staci. “We ride and work horses in them basically year-round, and we don’t usually think about them other than when we want to ride on really cold or rainy days. But there hasn't been a lot of research into them or the potential issues and environmental concerns connected to them.”

While the size of such facilities varies, it’s not uncommon for riding arenas to measure up to 200 x 300-feet. Expensive to build and maintain, arenas may look impressive while simultaneously harboring environmental problems.

“Because people work in these buildings all day, they’re often built with human comfort and aesthetics as priorities. But that might not be best. Owners spend hundreds of thousands of dollars to construct these arenas, so they need to be investments that serve their purpose and last a long time,” says Staci.

For her master's research, Staci conducted a large online survey of farms with indoor riding facilities.

“While anecdotal evidence convinced me that dust and moisture create environmental issues in these facilities, no one had ever pursued formal research to prove such problems exist.”

Now, Staci is pairing the data from that survey with site visits to farms with indoor riding arenas. Her team takes the structure’s dimensions and samples its temperature, relative humidity, airspeed and the footing. Staci says they’re on-site for roughly two hours.

“In addition to getting the data, we also interview the owner and the head trainer so we can understand their maintenance practices, how often they add footing and anything else that’s important for us to know.”

Moving forward, Staci plans to use a temperature and relative humidity nodal system that will enable her to distribute numerous temperature and relative humidity sensors throughout an arena. As the footing is worked and watered, the sensors will relay changes in micro-environments. She also wants to collect particles and determine exactly what is kicked up into dust. Her goal is to publish a resource guide for farms and barn owners planning to build new indoor arenas or retrofit existing ones. The owner of a horse breeding and training business, Staci says she sees an opportunity to make an impact in an industry she loves.

“When I was an agricultural biotechnology undergraduate, I did my research in protein synthesis. It was interesting and challenging, but it was very preliminary research. I was never going to see it impacting people and society. What I’m doing at UK is rewarding because it’s specific to the equine industry and will improve it.” 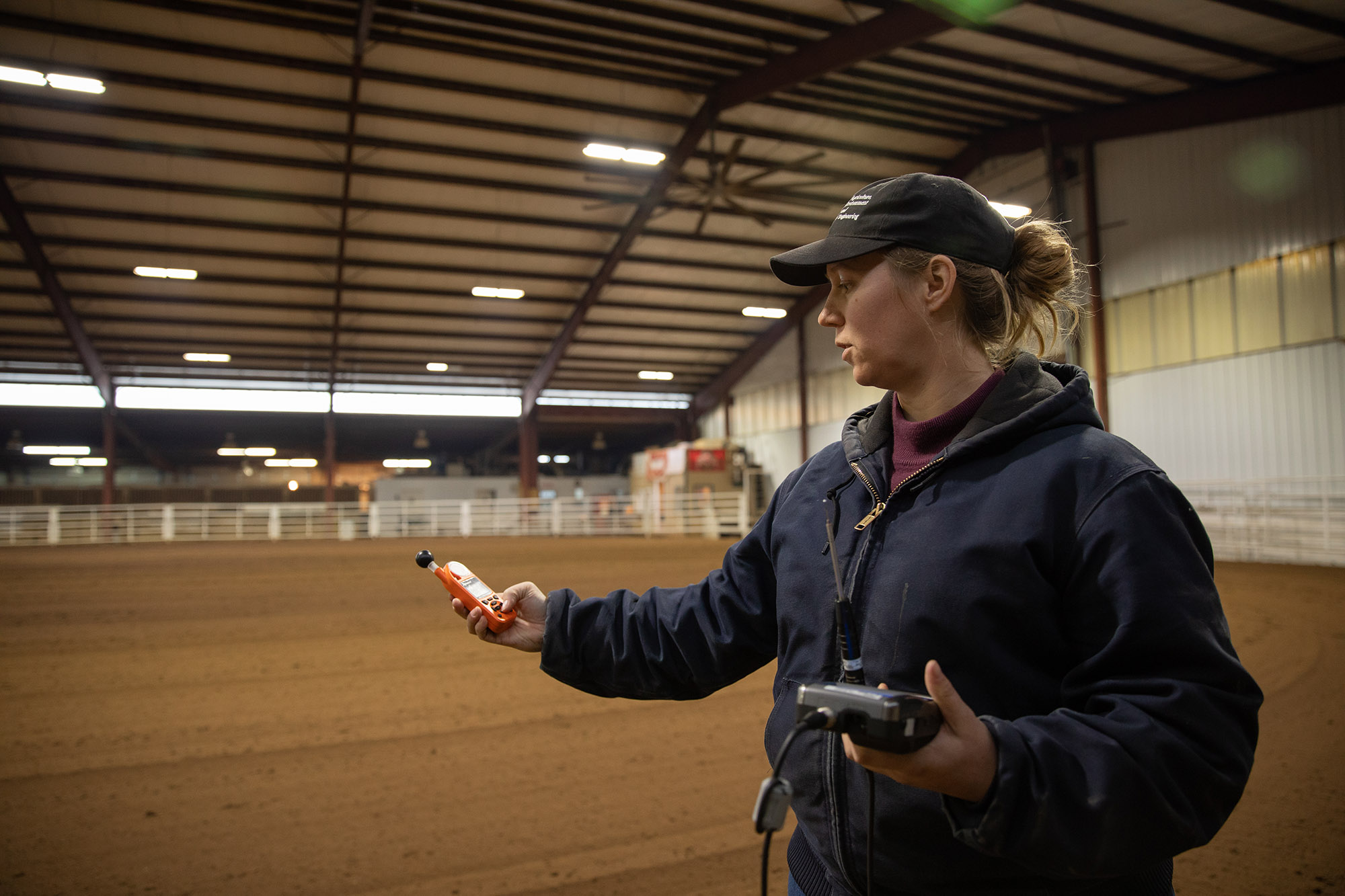 Morgan Hayes, assistant professor in the Department of Biosystems and Agricultural Engineering 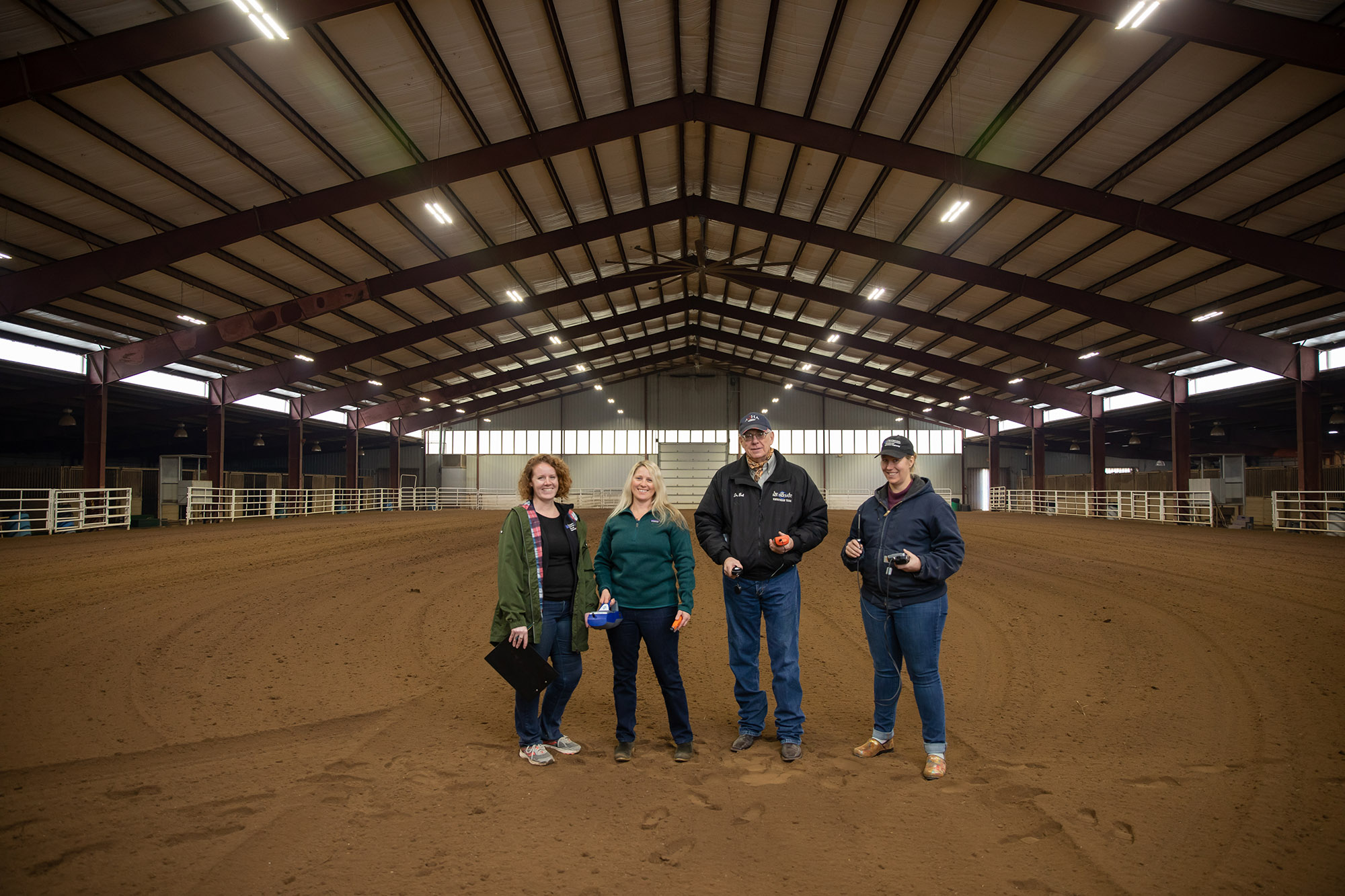