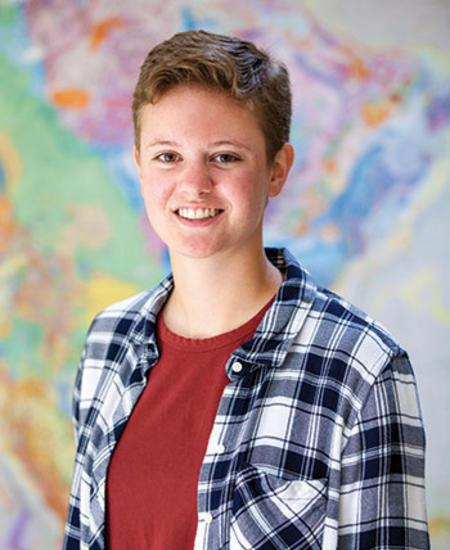 As a peer mentor, you are building individual relationships, and you see the fruits of your labor. You help them out and see them succeed.

At high school commencement ceremonies, new graduates are often charged to “find your passion and chase your dreams.” But as students increasingly face the pressure of securing a well-paying job after graduation, achieving a balance between well-rounded extracurricular fun and studying with an eye to one’s career prospects is a challenge.

Sarah Fay, a junior mining engineering student from Collierville, Tennessee, is determined to have it all.

Although thoroughly committed to excelling academically, Sarah possesses a vision for her college experience that expands well beyond the classroom. As a result, Sarah’s life is characterized by involvement in what she enjoys.

As a mining engineering student, it was natural that Sarah found her way to the UK Mining Competition Team (also known as the “mucking team”). An intercollegiate exercise that requires teams to master antiquated mining techniques, mucking competitions build community among mining engineering students, involve the mining industry in education and honor fallen miners. Students compete in seven events that incorporate a variety of mining tools, such as jack leg drills, swede saws and gold pans. Sarah cheerfully describes it as “competitive manual labor.”

Among the events, Sarah’s favorites include shoveling coal with teammates into mine carts (mucking), laying railroad tracks (track stand) and finding BB’s submerged in dirt and water (gold pan). Not surprisingly, she often ends those days covered in coal and mud. Though she used to have much longer hair, she recently traded 12 inches of it for a short bob, joking that the new style “is very convenient for hard hats.”

The UK team practices weekly throughout the year at an old mining site in Georgetown in preparation for the annual spring competition, which alternates between national and international locations. Sarah and five of her friends formed UK’s first Women’s Mining Competition Team in 2016 and competed in last year’s events surrounded by their teammates’ boisterous cheers. In 2018, Sarah and her teammates will travel to Camborne, England, to compete against teams from eight countries.

Mucking is exclusively related to mining engineering. What is Sarah doing that interacts with the whole college?

The College of Engineering’s Living Learning Program (LLP), called the Engineering Residential College (ERC), is the largest LLP on the UK campus. It houses nearly 600 students from all engineering majors, most of whom are freshmen coming face-to-face with the academic rigor of an engineering education.

Sarah was accepted into the ERC for her freshman year. She says she found the camaraderie and support of peer mentors to be an ideal setting for success.

“It was a really good environment for being successful as an engineering student, and making friends and doing a lot of fun activities.”

Sarah enjoyed her freshman experience so much that she is now in her second year as a peer mentor within the ERC. In addition to organizing floor events, she meets one-on-one with students and tutors at study sessions. She loves the emotional investment of staying up late with students, chatting and helping them with projects.

“As a peer mentor, you are building individual relationships, and you see the fruits of your labor. You help them out and see them succeed,” she says.

The ERC puts Sarah in touch with a broad section of the UK engineering community, but what about the campus as a whole?

An enthusiastic band member in high school, Sarah chose UK in part for its excellent marching band, in which she has now played the tenor saxophone for over two years.

“It’s an outlet,” she says. “I don’t want everything I’m doing to be engineering—or, even school—related. Band is definitely a source of stress relief from the pressures of engineering studies.”

Being in the marching band has allowed Sarah to build friendships with students across campus, some of whom are also engineering students. She is part of the growing GroupMe—a mobile group messaging app—conversation called “The Bandgineers.”

In addition to practicing and performing, Sarah serves as vice president of membership for Kappa Kappa Psi, a band service fraternity that promotes music and brotherhood through fundraisers, help with move-in and many other activities. She is just as passionate about being a band member as she is mucking and serving as a peer mentor.

Sarah spends each day investing in what she loves. However, she would not impose her approach to college on anyone else. Sarah is up front about the trade-offs.

“Sometimes I stay up until 4 a.m. doing homework. Sometimes I don’t spend enough time with people I care about. Sometimes my responsibilities overwhelm me. Sometimes I let people down. Sometimes life is really, really hard.”

Sarah says the single factor that keeps her focused is her love for what she is doing. That, she says, is the key to joy amidst the chaos of college.

“If you’re enjoying your time, it’s worth it. Do what you’re capable of, and be proud of that.”