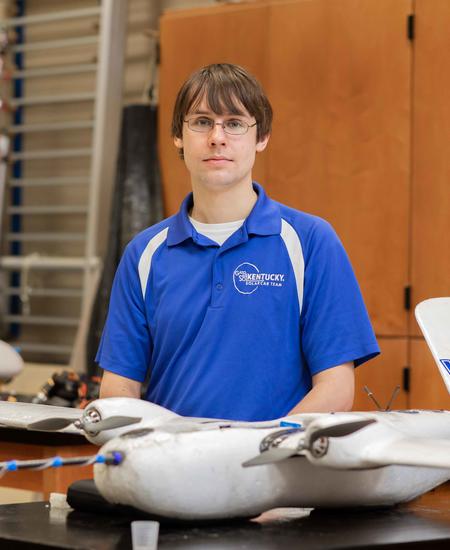 Controls are going to be very important in our Internet-of-things world going forward. If you mess up either the math or the implementation you could have disastrous results

“We’re trying to get the UAVs to fly close to one another but not collide,” says Chris Heintz. “We’re doing it in a mathematically rigorous way based on what we can prove they will do in the real world—where you have wind and other challenges.”

One of the biggest hindrances to conducting experiments with such aircraft is wind and poor weather. Flying in formation, flocking, swarming—such terms describe using multiple UAVs to work cooperatively. Making it happen requires expert knowledge of a field of study called “controls.”

“Applying controls means deciding what forces we want to put on a system to make it do what we want, despite the fact that it has, in some sense, a mind of its own,” Chris explains. “You can't just move the location of an object instantly; you have to apply a force to accelerate it and then once it’s approaching where you want it, you have to apply force to slow it down. The more complicated your system, the more complicated these dynamics become.”

Controls are used in everything from mobile devices to full-sized aircraft and industrial machinery. Chris says the emerging field of UAVs is allowing researchers to add powerful hardware and take advanced measurements using a small, inexpensive platform.

“Controls are going to be very important in our Internet-of-things world going forward. If you mess up either the math or the implementation you could have disastrous results.”

Although Chris didn’t initially plan on pursuing graduate studies, participating in the University Scholars Program enabled him to take graduate classes while still an undergraduate. In fact, he had nearly completed his Ph.D. classes before graduating with his bachelor’s degree in mechanical engineering in December 2016. In the meantime, staying at UK has enabled Chris to remain a vital part of the UK Solar Car Team.

“Being on the Solar Car Team is fun, but we also face hard deadlines—the car needs to be ready for the next race! It’s also a fresh application of what I’m learning as a researcher.”

Chris hopes to receive his Ph.D. at the end of 2020, after which he plans to find a job in research and development. Working with Hoagg in the area of controls has given Chris the blend of mechanical engineering and electrical engineering he enjoys.

“It’s big now, and it's going to get bigger as we see drones being used for delivery and self-driving cars take to the roads. The future is going to lean heavily on controls.”