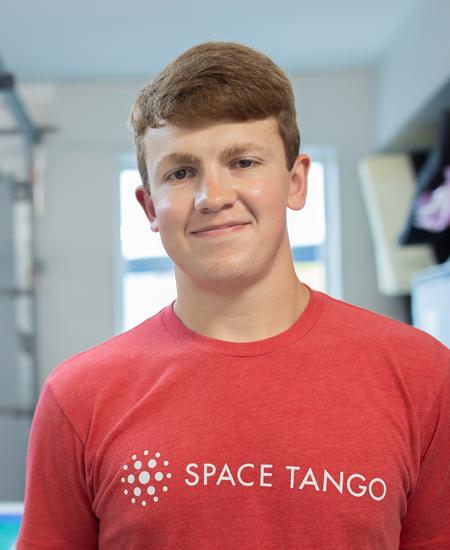 There’s so much I love about Lexington with its startup scene and the aerospace industry in Kentucky. I wouldn’t be disappointed at all to stay right here.

In Chess Necessary’s mind, the University of Kentucky offered the ideal engineering school. Its biggest flaw, however, was that it was too close to home. A resident of Georgetown, Kentucky--a short drive north of UK’s Lexington campus--Chess considered “going to college” as synonymous with “going away.”

If only he could pick UK up and plant it two states away, everything would be perfect. However, after evaluating his options, Chess determined that UK was the right choice for him.

“It’s nice to have family near while I’m at school, but at the same time, UK is a home away from home,” Chess says. “I had not spent extensive time on campus whenever I would visit as a high school student, so it really felt like a new home. Getting connected to people in the Engineering Living Learning Program and exploring Lexington with new friends made me feel like I was in a new place.”

“I picked mechanical engineering because it is the broadest discipline. I was interested in the math and science behind it, but I also knew Future Chess was going to change his mind about what he wanted to do with his life. With a mechanical engineering degree, I knew I could apply it in many ways,” he says.

While Future Chess may discover a new line of interest one day, aerospace engineering has served as a constant, deepening theme in his studies thus far. Channeling that interest into something tangible began with an email to Suzanne Smith, director of the Kentucky Space Grant Consortium and NASA EPSCoR programs at the time. In the message, Chess expressed a desire to co-op at a company in the aerospace industry.

Chess had never met Smith but emailed her anyway. It worked; Smith connected him to Helios Aerosystems in Lexington, where he began a summer coop rotation.

“Helios Aerosystems operates largely within the area of aircraft modifications. I did experimental design and analysis to determine what the numbers they were getting would translate to in real life so they could show them to their customers. My co-op also allowed me to work with Mesoloft, which did research with weather balloons. At the end of the summer, we traveled to Oregon and did balloon launches there.”

Buoyed by his positive summer co-op experience, Chess applied to co-op at NASA the following summer. He applied to upwards of 15 different projects during the fall of his junior year. In late March 2020, as the coronavirus began shutting down the world, Chess received a notice that he had been accepted to co-op with NASA Langley in Virginia. Like most experiences after that March, his co-op would be virtual.

“Obviously, I would have liked to have been at the actual center in Virginia, but there were upsides to having a virtual co-op,” says Chess. “As a virtual intern, I got to participate in seminars and workshops that took place across all of the NASA centers. I got to talk to and hear about more experiences than if I had physically been at Langley.”

Following his stint with NASA, Chess could begin to see his vocational future taking shape.

“One of my biggest fears about my career is that I’ll be bored with what I’m doing. So, I have been searching for something I find meaningful and interesting to do every day. Working at Helios and Mesoloft gave me hands-on experience and working at Langley exposed me to the more theoretical side. Space Tango allowed me to have both the hands-on and the theoretical within the space industry, which was something I already found interesting,” Chess explains.

Space Tango designs experiments for microgravity conditions and sends them to the International Space Station. Space Tango hired Chess as a mechanical engineering co-op and assigned him to a company attempting to develop artificial retinas.

“They realized after years of research that gravity is probably a hindrance to their layering process. They decided they wanted to layer and build those retinas in space and Space Tango is helping them do that. That’s a project I worked on a lot.”

Chess says Space Tango makes their co-ops feel valued, and that made an impression upon him. Given responsibility and autonomy, Chess was able to go through a whole project process with a team and see his work contribute toward achieving the company’s goal.

While Future Chess could always pivot toward an unforeseen area of interest--mechanical engineering is a broad discipline, after all--Chess sees himself working for startups in the space industry. Both are important to him, and he can envision starting a company of his own one day.

Maybe Chess will just have to get used to the idea it might be some time before he ever moves away from home. If so, that is all right with him.

“I’m not a homebody so I could easily pick up and go somewhere else, but there’s so much I love about Lexington with its startup scene and the aerospace industry in Kentucky. I wouldn’t be disappointed at all to stay right here.”