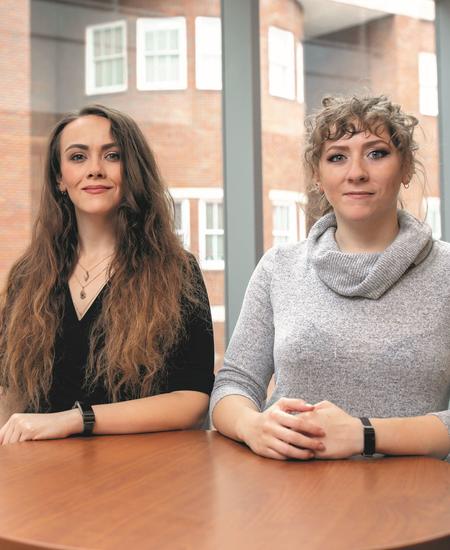 For us, the positive impact of scholarship donors’ generosity cannot be overstated.

When it comes to receiving scholarship help at the undergraduate level, students with prior degrees from other schools usually don’t expect much help. That’s why sisters Becca and Cassie Roberts from Winchester, Kentucky— both with degrees from other institutions—have been elated to receive ample scholarship aid from the University of Kentucky.

Since enrolling at UK, Becca has been awarded the College of Engineering Scholarship, the Garver Scholarship and the Distinguished Transfer Student Scholarship, while Cassie obtained an E. On US Scholarship this past semester.

“For us, the positive impact of scholarship donors’ generosity cannot be overstated,” says Cassie. “Due to our prior degrees we are ineligible for some types of aid—like grants—and as non-traditional students we have more financial obligations than the average student. We can honestly say that without scholarships we would have been unable to shoulder the financial burden of pursuing engineering degrees at UK.”

What brought them to UK after already earning degrees in the sciences? Cassie wanted to leverage her chemistry background toward a chemical engineering degree, while Becca wanted to establish a second career related to computer science.

“It’s a little cliché, perhaps, but I’m very passionate about ‘making the world a better place,’” says Cassie. “As I neared the end of my chemistry degree, I became very interested in innovative technologies in environmental protection and power generation. I really wanted to be able to apply my chemistry and math knowledge toward sustainability efforts, and UK offered me a place to do that.”

Becca, who graduated from Morehead State University with a bachelor's degree in biology and a master’s degree in biology from Eastern Kentucky, worked as a professional biologist before becoming dissatisfied with where she was heading.

“I knew I needed to seriously rethink my career and move in a direction that would be more intellectually challenging and satisfying yet allow me to earn more competitive wages. I feel that the additional education in computer science will do exactly that,” she says.

“The opportunity has been really amazing,” she says. “I’m able to incorporate my knowledge of quantum mechanics with principles from both chemical engineering and computer science.”

Becca recently became involved with a multidisciplinary bioinformatics group at UK that comprises researchers from the computer science and plant pathology departments.

“I’m hoping to contribute to their research on heritable mutualistic symbioses between plants and seed-borne fungal symbionts this semester and on into the summer,” she says.

Becca and Cassie hope their unique educations and experiences will allow them to pursue careers in disciplines that work at the cutting edge of where technology intersects with the life sciences. Cassie is especially interested in automotive and fuel applications. Becca is drawn toward bioinformatics and machine learning.

“Many of the challenges facing humanity today require incredibly multidisciplinary approaches, such as environmental issues like water quality, climate change and energy, as well as medical advancements like computationally analyzing genomes in order to understand and combat disease,” Becca says.