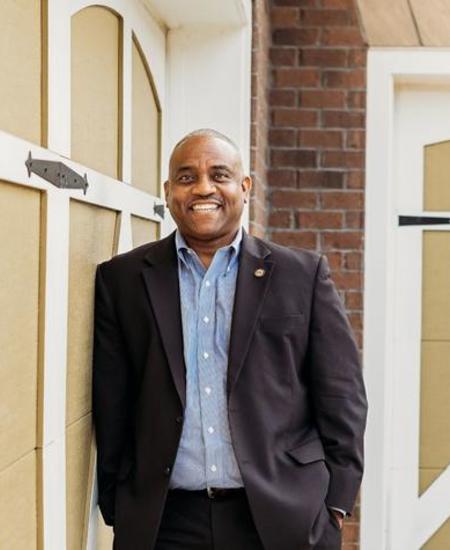 UK has been integral to my growth in life. It allowed me to leverage my degree to get my start. I benefited greatly from my time there and I want to acknowledge that by my giving.

In his recently published book, “Not by Accident,” University of Kentucky alumnus Eric Coleman (BSME ‘92) says nothing in his life has been coincidental, not the people and relationships that have shaped his life, nor the opportunities that he has been given. From early on, he’s been encouraged to push past his challenges and aim higher.

He describes his life as blessed and part of a much bigger plan than even he could have imagined. It is because of his successes and his gratitude to those who encouraged him along the way, including his college alma mater, that Coleman is establishing a scholarship to benefit UK College of Engineering students and the Center for Academic Resources and Enrichment Services (CARES) in the Office for Institutional Diversity.

Coleman had big dreams for his future growing up in the small community of Pembroke, Kentucky, and he knew that education was the first step for achieving those dreams. He also knew that his education had to be free, as he came from modest means and a college education was out of his family’s financial grasp. The financial burden of a college education was hardly a discouragement for Coleman who had the innate belief he could do anything with hard work and his faith in God, a belief he has carried with him throughout his life.

“I believed I could do ALL things through Christ and I never set limits on myself,” he said.

From Pembroke Elementary through Hopkinsville High School and beyond, Coleman had teachers along the way who helped mold and shape him into the successful businessman, book author and entrepreneur he is today. They so influenced him that Coleman still maintains a close relationship with some of his mentors today. Coleman says his mentors and encouragers helped to ignite, fuel and reinforce the internal drive that he had to succeed.

Coleman graduated among the top three at Hopkinsville High School, setting up a pattern of success. Early on, he had the desire to give back to his community and to help others as he has been helped, establishing a pattern of giving. Coleman’s assistant principal at Hopkinsville High is one such mentor who impacted his life in such a significant way that he funded the Levi Peterson Jr. Scholarship named in honor of his mentor and given to a Hopkinsville High senior annually.

As a young man, Coleman’s dreams of success were also nurtured through reading Ebony, Jet and Black Enterprise.

“Those magazines became my window to the world, so to speak. In them I saw people who looked like me who seemed to be achieving big things.”

Coleman graduated from UK with a bachelor’s degree in mechanical engineering. After graduation, he began his career at Union Carbide Chemical Company that later became Dow Chemical as a result of an acquisition), which sponsored him in the Graduate Engineering for Minorities (GEM) program at Georgia Institute of Technology where he received his master’s. Also, while at Dow, he received an MBA from Northwood University in Midland, Michigan.

“UK has been integral to my growth in life. It allowed me to leverage my degree to get my start. I benefited greatly from my time there and I want to acknowledge that by my giving. Giving back is setting an example of what it means to benefit from opportunities and to now support those opportunities and create new ones that will be of benefit to others,” Coleman said.

Coleman recently began laying the groundwork with college officials to establish a scholarship for students entering the UK College of Engineering. He says the money will go toward the scholarship and the UK CARES program, an academic support system to aid in the retention and graduation rates of underrepresented students. The program’s activities assist students in achieving academic success as they adjust to student life at UK.

“The College of Engineering is grateful for Mr. Coleman’s partnership,” said Rudolph Buchheit, dean of the college. “His generosity is helping to expand access to engineering education and is deepening the engineering talent pool.”

Coleman currently lives in Atlanta, Georgia, with his wife, Joan. They have two adult sons, Johnnie and Eric Christopher. After retiring in April 2019, the first thing Coleman wanted to do was to use his experiences and knowledge to teach others how to achieve and plan for a comfortable future by writing “Not by Accident.” He and his wife teach weekly classes that coincide with the book on financial literacy and how to build sustainable and generational wealth.

“The book highlights a way of building wealth that was beyond what I understood,” he said. “If you have vision, seek out relationships, information and learning opportunities, you can grow and build wealth. It happened to me and it can happen to you. It came about because of what people were pouring into me, and what opportunities God placed on my path.

“If Lyman T. Johnson risked his life to open doors of opportunity for me and others who look like me, then I want to continue that legacy through my giving.”

Black Philanthropy Month, observed every August, was organized by Dr. Jackie Bouvier Copeland and the Pan-African Women's Philanthropy Network in 2011 to commemorate the United Nations Year and Decade of People of African Descent. Since then, it has transformed into an initiative that has reached over 17 million people and showcases the impact of generosity in Black communities and from African American and African-descent philanthropists. The University of Kentucky Office of Philanthropy joined this mission throughout the month of August on social media to inform, involve, inspire and invest in Black philanthropic leadership at UK.

Kentucky Can: The 21st Century Campaign is a comprehensive campaign focused on increasing opportunities for student success, funding innovative research, improving health care, strengthening our alumni network, and supporting our athletic programs. For more information about Kentucky Can, visit kentuckycan.uky.edu.