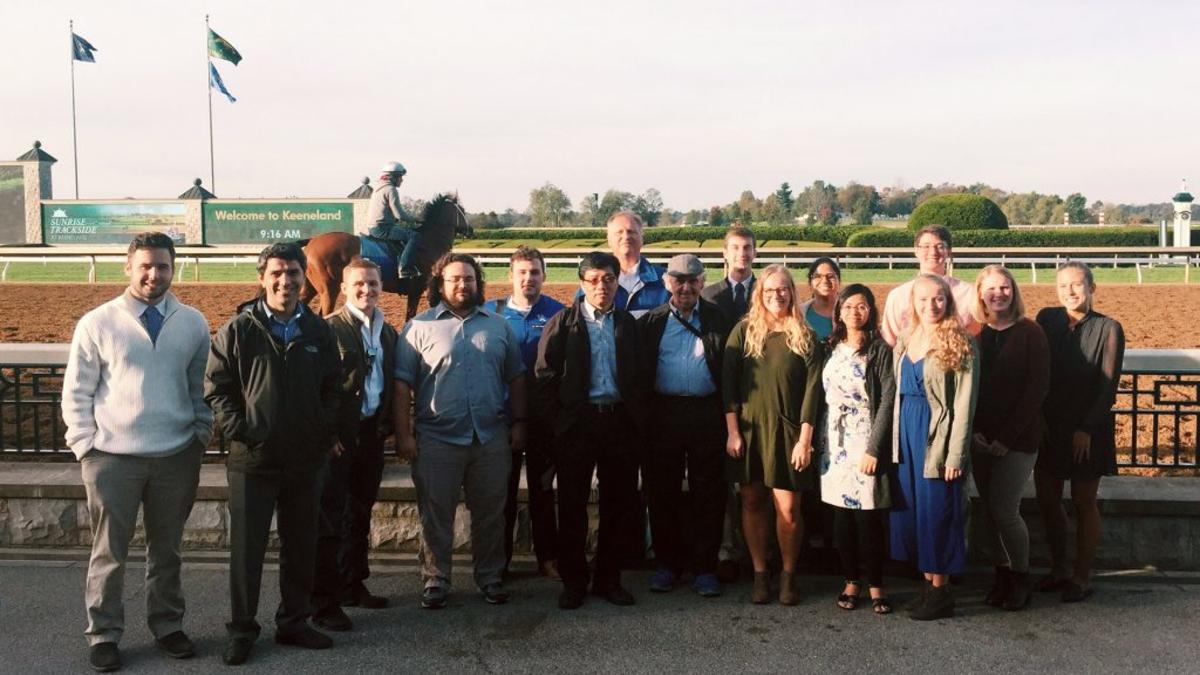 Among many things, Kentucky is known for its horse racing. For biomedical engineering (BME) students at the University of Kentucky, going to the racetrack means not just watching horse racing but learning to solve biomedical engineering problems for horses in a real-world setting. Such an event took place early Saturday, Oct. 21, 2017, at the Keeneland Racecourse in Lexington.

The event began with participants enjoying a hot breakfast in Keeneland’s Equestrian Dining Room while watching a beautiful sunrise. Over breakfast, the group listened to Mr. Giacomini talking about the importance of the state of balance and relaxation for a horse, as well as his experience in the areas of biomechanics, biomaterials and electronic devices.

Prior to the event, students were challenged to use bioengineering means to come up with design ideas to address biomechanical problems encountered in racing horses. Following breakfast, students began presenting their ideas. The undergraduate team presented their approach first. After introducing the historical and economic importance of horse racing in Kentucky, the team discussed the problem of horse bone fractures in horse racing. The team proposed the use of ultrasonic means to strengthen bones as well as to heal injured bones. They not only cited the bone remodeling theory of Wolff’s Law to support their idea, but also laid out detailed plans to test their hypothesis.

The most intriguing aspect of the undergraduates’ idea was reflected in the dots they connected. As described by Lucy Niemeyer, “Limestone is the major cause of famous Kentucky staples such as the caves and waterfalls, Kentucky bourbon and, most appropriately, horse racing. At first thought you wouldn’t put the subjects of geology and bioengineering together, but the history of limestone plays a key role in the bone structure of horses. Limestone is composed of calcium and bicarbonate ions. When it rains, the limestone breaks down and the calcium is released. This can happen because rain water is slightly acidic. The calcium then goes into the environment, including water and plants. Horses then eat and drink the high concentration of calcium, and therefore have a stronger bone density.”

Lucy even did a demonstration to show the presence of phosphate in limestone by adding drops of acid to the purple colored phosphatase to cause a sizzling chemical reaction.

The graduate team proposed a data collecting clip-on horse shoe idea as a real-time horse performance feedback device to the rider. The team also provided their hypothesis and ways to test it.

As a judge, Mr. Giacomini offered his experienced insights and critiques for both teams. He highlighted two things: 1) the need to find out what has already been done or attempted so that one does not reinvent the wheel or repeat what is not working, 2) the focus on the end values of what one does, such that one’s creation is not just for inventing something new but for something of value to users.

Dr. Zhang also offered his assessment of the presentation by echoing the two points raised by Mr. Giacomini and providing explanations for why they are important. He then congratulated the undergraduate team for a great job in proposing a biomedical engineering approach and laying out means to bring the idea further along. He particularly expressed his delight in seeing them connecting the dots in the learning process. He also offered his insights and critiques to the graduate team. 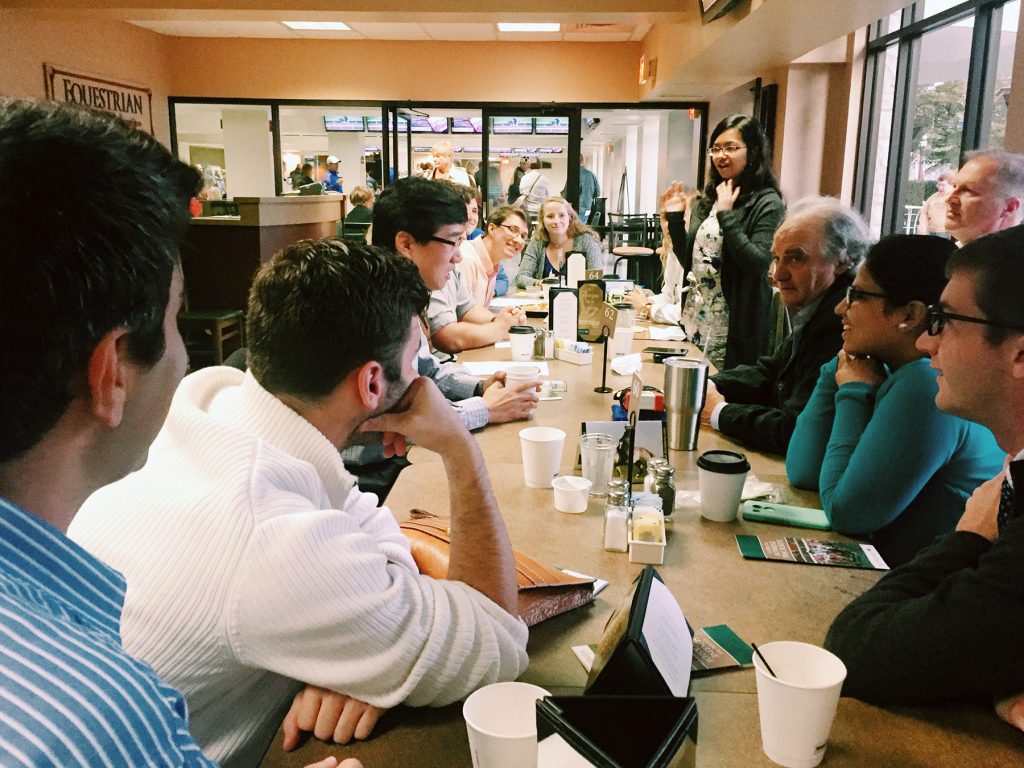 After breakfast and presentation discussion, the group moved trackside to watch horses running and warming up. Mr. Giacomini offered interesting insights as to which jockey-horse couple had a visibly relaxed and harmonic relationship.

After the event, Mr. Giacomini expressed his appreciation for being invited to observe and provide feedback from his real-world viewpoint to students’ efforts and intellect. On the other hand, students expressed their enjoyment and appreciation for the unique experience. In particular, students noted the helpful nature of discussing engineering problem solving approaches with real-life experts in the particular field. “I really enjoyed the event we had at Keeneland, and I learned a lot from it too. It would be great if we had similar (or completely different) events in the future to engage the BME community at UK,” said one student.

Others added, “I very much enjoyed the meeting at Keeneland. I learned a lot from the project as well as from our guest speaker. I think more of these meetings would be beneficial in the future” and “I really enjoyed this experience. Most of the time learning is done in a classroom on campus, so being able to leave campus to learn was really refreshing.”

The student sentiments say it all. Although this is the first such event organized by UK’s BMES and sponsored by the F. Joseph Halcomb III, M.D. Department of Biomedical Engineering, it surely will not be the last. For students at UK interested in learning more about the biomedical engineering field, please contact UK’s BME department or UK’s BMES Student Chapter (ukybmes@gmail.com).