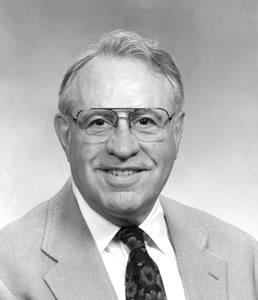 Merl Baker, a native of Cadiz, Kentucky, received a Bachelor of Science degree in mechanical engineering from the University of Kentucky in 1945. He was a member of Omicron Delta Kappa, editor of the Kentucky Engineer, president of the American Society of Mechanical Engineers student chapter, managing editor of The Kentuckian, and held leadership roles with the Student Government Association. After spending one year in the U.S. Navy during WWII, he pursued a Master of Science degree and a Ph.D. degree in mechanical engineering from Purdue University, receiving the degrees in 1948 and 1952, respectively.

Dr. Baker began his career as an educator and administrator in higher education with his appointment as assistant professor at the University of Kentucky Department of Mechanical Engineering in 1948, advancing to associate professor in 1952 and professor in 1955. In 1953, he was appointed as the first executive director of the Kentucky Research Foundation, responsible for planning and advancing the University’s research programs and developing sources of external funding, which increased tenfold under his leadership. He was named director of international programs in 1955, coordinating the University’s program with the U.S. Agency for International Development (USAID) and providing educational assistance to universities in Indonesia and Guatemala.

In 1963, Dr. Baker was appointed Dean of the University of Missouri’s School of Mines and Metallurgy at Rolla, recognized at that time as one of the top schools of its kind. When the campus was reorganized in 1964, he was inaugurated as its first Chancellor. Heading the technological campus, Dr. Baker planned and presided over growth in faculty quality, enrollment and physical facilities, including a new library and mechanical engineering building. Particular growth was noted in graduate and research programs. A College of Arts and Sciences and an Engineering Management Department were established, along with 11 centers and a graduate engineering center in St. Louis. Dr. Baker led the first engineering program pursued in South Vietnam funded by USAID.

Dr. Baker was named special assistant to the President of the University of Missouri system in 1973. During the next three years, he conducted research in the organization and management of public higher education, culminating in an extensive report, Multi-campus and Consolidated University Systems: Administrative Structures and Governance.

Widely known and respected for his organizational management expertise and experience in heat transfer and energy conservation, Dr. Baker was appointed to key management positions at Oak Ridge National Laboratory from 1977 until 1982. He managed projects in energy policy and utilization and prepared reports interpreting federal energy programs to aid utilities and state and local governments.