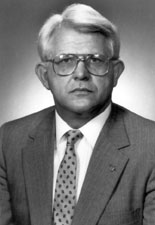 Born at Kings Creek in Letcher County, Kentucky, James B. Day graduated from Whitesburg High School in 1957. He began his collegiate career at Pikeville College, Pikeville, Kentucky but later transferred to the University of Kentucky where he received the Bachelor of Science in Mechanical Engineering degree in 1961. He would later earn the Master of Science in Mechanical Engineering from UK in 1969.

Mr. Day then joined Wright-Patterson Air Force Base (AFB), Ohio where he spent 34 years in Government service employed as a civilian engineer engaged in the research and development of military jet engines. At the time he began his professional career, the Cold War continued to escalate as did the United States’ involvement in the Vietnam War. Government and military leaders realized the need for a superior fighter jet to perform fighter sweep, escort and CAP missions but one with sufficient range and combat persistence to reduce demands on tanker support.

Mr. Day led work on a new generation of jet engines with a thrust/weight ratio of around 8:1, giving so light a power plant weight that there was still plenty of scope for internal fuel. This new engine allowed the F-15’s rate of climb and acceleration to be twice as fast as was previously possible.

After completing his MSME degree, Mr. Day returned to Wright-Patterson AFB as the Chief of Analytical Methods for F-15 and F-16 jet fighter engines. In 1975, he was named Chief of Propulsion and Power for the F-15 fighter jet. From 1978-1981 his focus shifted to the F-16 fighter as its Chief of Propulsion. Mr. Day was next named Chief Engineer for Tactical Engines, a position he held for the next three years.

In 1984, he became Chief Engineer of Propulsion at Wright-Patterson AFB, and in 1993, was named Director of Propulsion. For more than a decade in these later two positions, Mr. Day directed all propulsion development activities including development, production and support, for all U.S. Air Force jet engines including the F-15, F-16 and F-22 fighter aircraft and the B-1 and B-2 bombers.

Mr. Day’s engineering and managerial leadership resulted in unprecedented advances in air breathing propulsion and jet engines, advances which more than doubled engine power output per unit weight while cutting fuel consumption in half. These engineering accomplishments positioned the United States for world preeminence in military and civilian aviation.

Throughout his years of service, Mr. Day was recognized nationally and internationally as a propulsion expert. He served as an advisor to senior members of the Department of Defense, officials of the U.S. Air Force and U.S. Navy, and to U.S. allies in Europe, Asia and the Middle East.

In 1995, Mr. Day retired from Government service and joined the Belcan Corporation, Cincinnati, Ohio, as a Vice President. An engineering company, Belcan serves the propulsion and power industry in design, analysis and fabrication. He also maintains a consulting business with numerous aerospace-related clients including the U.S. Air Force, General Electric, Rolls-Royce, and Lockheed Martin.

For his contributions to the profession, Mr. Day has received a number of honors including the Exceptional Civilian Service Award, the highest civilian award presented by the Secretary of the Air Force; the Air Force Systems Command Certificate of Merit; and the Award for Outstanding Professional Achievement from the Engineering and Science Foundation. Additionally, he was appointed to the United States Senior Executive Service, the highest rank achievable in Federal service, at the early age of forty-two.

Mr. Day and his wife, the former Jowanda Davis, reside in Beavercreek, Ohio. They are the parents of two daughters, Katharine Day Treml and Elizabeth Day, both University of Kentucky mechanical engineering graduates. His outside interests include reading, particularly history, and restoring cars.