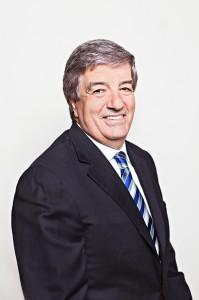 Dr. Ed Saad was born in a south Lebanon village to a family of modest means. After completing technical school with distinction in 1970, his father sent him to the United States, where a brother and sister were living in West Virginia. Unable to speak English when he arrived, Dr. Saad began listening to instructional tapes and receiving tutoring while immersing himself into campus life at Marshall University. He excelled in physics, math and chemistry courses, which, combined with his honors in Lebanon, led to a scholarship offer from MIT. He graduated from there with a bachelor’s degree in chemical engineering in 1974 and a master’s in chemical engineering in 1975.

Interested in obtaining a Ph.D., Dr. Saad accepted a graduate fellowship offer from the University of Kentucky. Under the guidance of doctoral advisor Dibakar Bhattacharyya, Dr. Saad received his Ph.D. in 1977 and began working at Ashland Oil Inc., as a research engineer. Before long, Dr. Saad was promoted to general manager and given responsibility for executing negotiations overseeing construction of a $700 million lube oil refinery in Saudi Arabia.

In 1982, Dr. Saad received an offer to serve as a technical advisor to His Excellency, the Governor of the Ministry of Oil, Kingdom of Saudi Arabia. He served in that capacity for six years. The experience paid tremendous dividends when, in 1990, Dr. Saad took over an oil company and began focusing on niche markets as president and CEO of Gulf Interstate Oil Company, a position he continues today. From his highly visible position of advisor to the Governor of Saudi Arabia, Dr. Saad was known to everyone in the oil industry. Consequently, he was a chief influencer and provided technical and commercial consultancy services on major oil and gas projects in the Middle East. From 1990-2008, Dr. Saad was involved in projects ranging from a few hundred million to a few billion dollars. Further, his company generated approximately $400 million annually through crude oil, gas and refined products trading.

Shakespeare and Co.’s annual revenues are an estimated $60 million and plans are underway to expand in the Middle East, Far East and U.S.

Dr. Saad lives in Lexington, Ky. He has four children.