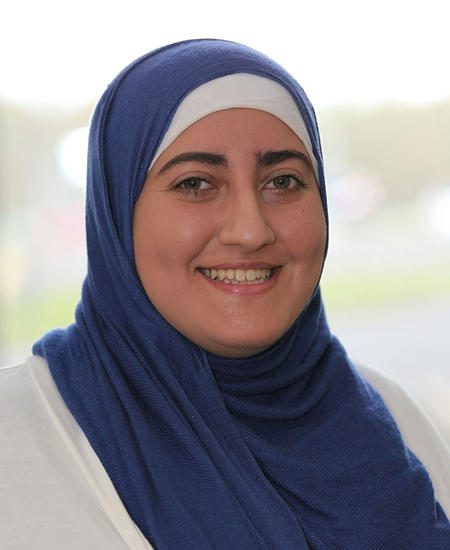 I am much more interested in chemical engineering than I thought I would be.

Literally. One day Rana was dead set against it, the next morning she couldn’t be talked out of it.

Rana, a junior from Paducah, has always wanted to be a doctor. An undergraduate degree in biology seemed like a natural route to her, but that would require leaving the area. Her cousin, a chemical engineering major at UK Paducah named

Mohamed, encouraged her to stay home and see what the extended campus has to offer.

Rana wasn’t having it.

“I had never been interested in chemical engineering,” she recalls.

That changed during a “See Blue” night in Paducah Rana attended with a friend. Alex Sherwood, director of recruitment and career services at UK Paducah, spoke to the two women about saving money by staying local and studying chemical engineering. Rana demurred, saying she wasn’t interested because ultimately she wanted to go into medicine. Sherwood asked if Rana knew chemical engineering often serves as a pathway into a medical career.

It’s true, said Sherwood. Many people have majored in chemical engineering and then gone into medicine, pharmacy or other avenues within the health industry.

The next morning, Rana and her friend excitedly announced to each other that they were going to enroll at UK Paducah.

“I still want to go into the health industry, but I am much more interested in chemical engineering than I thought I would be,” she says.

Last summer, Rana was accepted into Baptist Health’s Pre-Med Academy, where she had the opportunity to shadow doctors. She will continue that internship this summer, even as she begins peeking into her newly acquired MCAT study guides.

Rana’s trajectory toward medical school hasn’t escaped the notice of her younger sister, who is in high school. Rana says she also wants to be a doctor.

“She has watched me study and said, ‘No, chemical engineering is not for me.’”

We’ll see. Plans have a way of changing overnight.