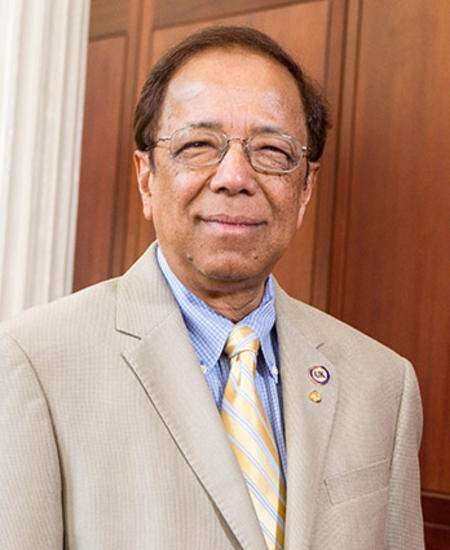 Think of a pipe. Normally the diameter is fixed. But what if I put a reactive, long chair biomolecule or polymer on the surface of a nano-sized pipe and changed the acidity of the water slightly.

“You give me water of any kind, and I know how to treat it and make it drinkable or reusable.”

Those are the words of University Alumni Professor of Chemical Engineering Dibakar Bhattacharyya. The director of the University of Kentucky Center of Membrane Sciences is renowned for his research into membranes for filtering and producing clean water. In 2017, Bhattacharyya, universally known as “DB,” celebrated 50 years of prolific research at UK.

"DB is one of the leading authorities in the world on membrane and water research,” says Escobar. “He has given invited lectures in all continents but Antarctica. His name is known by all doing membrane research as one of the people always on the cutting edge.”

“Think of a pipe,” DB instructs. “Normally the diameter is fixed. But what if I put a reactive, long chair biomolecule or polymer on the surface of a nano-sized pipe and changed the acidity of the water slightly, or altered the temperature by one degree? The flow could be changed dramatically.”

This research has taken DB around the globe. Last year he attended and presented an invited paper at a conference in Portugal, where two of his Ph.D. students also received poster presentation awards. Also, through Australian Research Council funding, he and his students are making advanced graphene oxide membranes with Monash University.

“Research has no boundaries,” he says with a grin.

DB and his team received his most recent grant from NSF through a challenging process based on discussions and a proposal of innovative ideas. This NSF grant in 2017 is from the NSF EAGER program and DB will work with Electrical and Computer Engineering Professor Todd Hastings and Doo Young Kim from the Department of Chemistry.

“Sometimes, even outstanding proposals don’t get funded. It has to be high-class science, an innovative approach,” says DB.

DB’s team brought that innovation to the table by rethinking the process of hydrogen creation from organic waste through light and photobacteria. Though this capability has been known for a long time by biologists, DB and his students discovered near-infrared radiation light as the best light for this process. Using the properties of infrared light to convert organic waste to hydrogen can eventually be used for many practical applications, such as running a car with fuel cells. Southern Company of Alabama found the hydrogen production work very exciting and funded a research contract in November 2017 to further advance the project towards commercialization.

Despite the far-reaching implications of his research over five decades, DB ultimately measures his success by different criteria—his students.

DB spends hours preparing innovative lectures and grading exams. His weekend is often not a weekend, as he balances class and research and talks to students at all hours of the night. DB says his wife, Gale, a retired teacher of over 22 years, is always highly supportive of his work at UK and provides motivation and joy.”

Further, his motivation in laboring on his grants is to open up possibilities for Ph.D. and undergraduate students. Grants make it possible for students to earn degrees and perform important lab research to bring innovations. This reality continues to drive DB, even in his sixth decade at UK.

“It’s not about me,” he reflects. “Some of my past students are presidents and group leaders of companies. “They make way more money than I make and are highly successful. For me, that is success.”