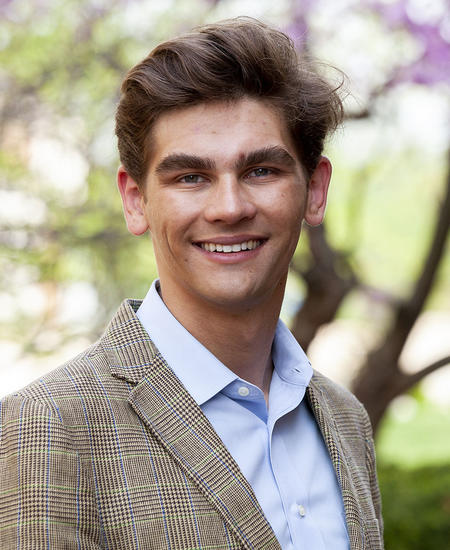 I have done so much that I never thought I would be able to accomplish, and I’m forever indebted to UK because of it.

When Boone Proffitt reflects upon his time at the University of Kentucky, one word comes to mind: opportunities.

A graduate in the Class of 2018, Boone received his bachelor’s degree in civil engineering while minoring in mathematics. A sixth generation Kentuckian and a third generation Wildcat, Boone’s grandfathers both played football at UK (Claude Hammond, Class of 1942, and Jim Proffitt, Class of 1954).

Boone was a member of the Chellgren Student Fellows Program and Gaines Center for the Humanities. He also served as director of government relations for the UK Student Government Association and the promotions coordinator for DanceBlue. Boone participated in several international trips to widespread locations such as Nicaragua, China and Israel. During his final semester, Boone organized a video conference for engineering students with a personal hero of his, former Secretary of the Interior Sally Jewell.

How did he do it all?

“It’s a mix of putting yourself out there and grabbing opportunities as you go, and honestly, a lot of luck,” he says, laughing.

A prime example of that combination in action is his trip to a United Nations conference in Ecuador. Boone took the initiative, researching it and deciding he wanted to attend due to the Gaines Fellowship thesis on urban parks and spaces he was writing at the time. Gaines and his engineering professors supported him—so he hopped on a plane and attended as the youngest member of the U.S. delegation.

“Especially outside of America, there is such a need to rebuild human settlements. As a civil engineer, I feel like I have the moral and ethical foundation to do things like that. I view my purpose in the world as a global call to help people,” says Boone.

Boone currently works for Third Rock Consultants, an environmental engineering consulting firm in Lexington. He plans to work there for several months after graduation but his long-term plans include a return to California. Even so, he has a desire to continue what his family has started in Kentucky.

“I now know why my parents and grandparents love the University of Kentucky so much,” he says. “I have done so much that I never thought I would be able to accomplish, and I’m forever indebted to UK because of it.”