Understanding the Impacts of Transportation Network Companies with Greg Erhardt 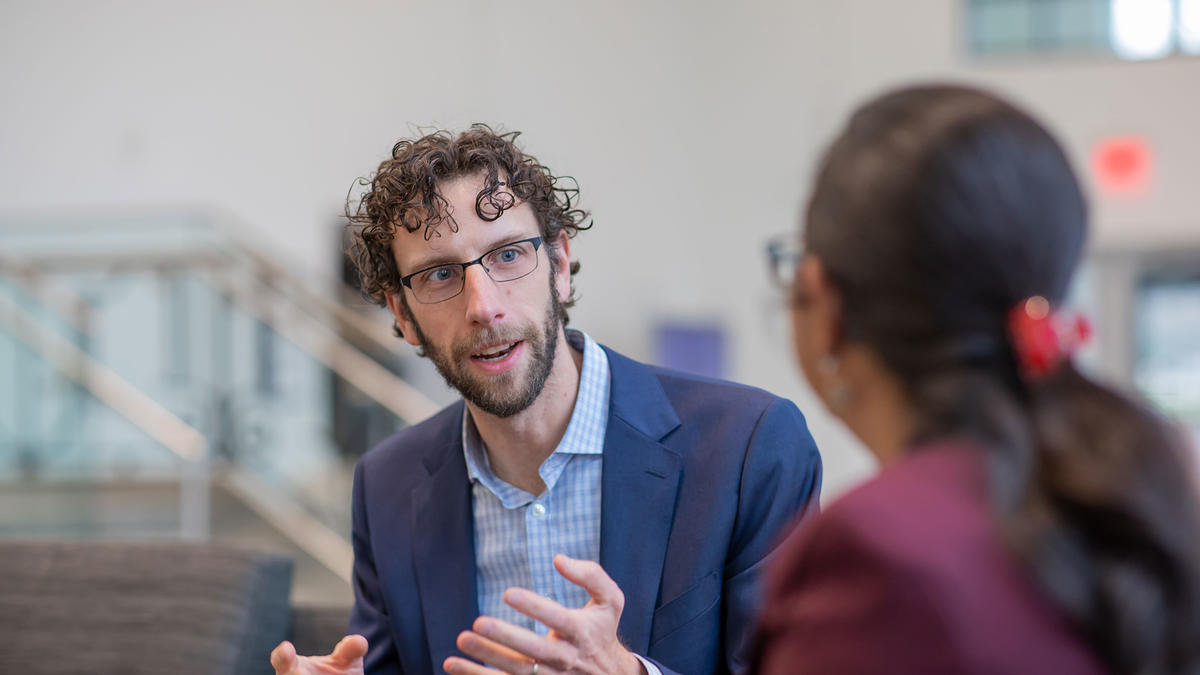 When John Zimmer took a city planning course in college, he had an epiphany: We’ve built our communities entirely around cars. As a result, we have more traffic and pollution and fewer green spaces, sidewalks and parks. Determined to revolutionize public transportation, Zimmer became co-founder and president of Lyft, a popular transportation network company (TNC).

“...I believe we’re on the cusp of nothing short of a transportation revolution — one that will shape the future of our communities,” wrote Zimmer in a 2016 blog post titled “The Third Transportation Revolution.” “And it is within our collective responsibility to ensure this is done in a way that improves quality of life for everyone.”

Uber, a larger ride-hailing service with an estimated 100 million users worldwide and the biggest market share within the United States, has espoused similar hopes. A former mission statement for the company reads: “Uber is evolving the way the world moves.”

"TNCs have pretty strong PR arms,” says UK civil engineering assistant professor Greg Erhardt. “They come along and say, ‘Look, we're new technology. We're green. We’re sustainable. You don't need to regulate us or make us follow the same rules as taxi cabs. We’re going to fix your city’s congestion problems.’ And cities have been happy to get on board.”

Sounds like everyone wins, right? Erhardt says not so fast.

“The question is whether their claims are accurate from a public policy perspective. We want to look at what’s really happening. TNCs got bigger than people expected and in a short amount of time, so we're trying to understand the impacts of those companies on the transportation systems.”

Erhardt says one challenge inherent to such research is that TNCs operate in major U.S. cities, making it near impossible to set up experiments and change one factor at a time.

“The economy has been strong lately, and these cities are adding jobs. More people are going to work. Their populations are growing as well. You have factors like gentrification, changes to the service, fluctuating gas prices— all of these affect the whole picture in different ways, so it is challenging to parse out one particular area."

Challenging, but not impossible.

“The reason why this is so significant for us is that it provides direct measurement of the operating conditions on a given roadway: speed, delay and travel time. Before this technology came in, it had been really expensive to get this data. Now, we can directly measure what's happening on the road.”

Data of this kind has been available since 2009, so it is possible to see how congestion has changed over time at any given location, as well as network-wide.

“You can see what the rate of speed was for any particular road from 9 to 9:05 a.m. on January 1st, 2019, and then compare it to that same timeframe three, six or even 10 years ago. The continuous data lets us measure the change in congestion over time,” Chen adds.

How does that relate to the TNCs? Chen says researchers from Northeastern University produced their own data set pertaining to Uber and Lyft trips in San Francisco and made it available to the San Francisco County Transportation Authority (SFCTA).

That’s where UK comes in.

In October, SFCTA released a report titled TNCs and Congestion, the first comprehensive analysis of how TNCs have contributed to traffic congestion in San Francisco. Erhardt, Chen and doctoral student Sneha Roy conducted the research which found that transportation network companies accounted for approximately 50 percent of the rise in congestion in San Francisco between 2010 and 2016. Forbes, Wired, and numerous local and national news outlets picked up the report.

“When you add a new TNC vehicle to the road, is it taking off vehicles from the road or is it adding vehicles to the road?” asks Roy. “We found that about 67 percent of all TNC vehicles added to the network are new cars and only 33 percent are substitutes, which significantly increases congestion, especially in a city like San Francisco, which is already congested.”

According to Erhardt’s doctoral student, Alex Mucci, increased congestion isn’t the only impact caused by TNCs. Transit ridership, especially on buses, is down.

Mucci, Erhardt and undergraduate student Michael Graehler presented their findings at January’s 98th Annual Meeting of the Transportation Research Board. The paper, titled “Understanding the Recent Transit Ridership Decline in Major US Cities: Service Cuts or Emerging Modes?” revealed that in 22 major U.S. cities, bus ridership experienced a steep drop. Heavy rail systems, such as subways, also experienced a drop, although not as severe as bus lines.

“You would expect that with the population growing in these cities, transit ridership would be going up, but it's not,” says Erhardt. “That gap seems to be correlated with the entry of TNCs into the market. TNCs say they’re bringing people to the rail stations, but we can also see that they're concentrated in the city centers and near tall buildings where it's hard to park. Those are the exact same places where bus trips are most viable, so you're taking people off the bus and putting them into a car.”

Is there a downside to taking people off buses and putting them in Uber or Lyft cars?

“There’s a clear benefit for the person in the car. They're getting a better experience, or they wouldn't do it,” Erhardt agrees. “But there is a negative impact on everyone else: on the road system, other drivers and the people on the bus who also have to wait in traffic.”

“What’s best for you is not always best for everybody else or the traveling public as a whole,” Chen adds.

It sounds like instead of Uber and Lyft solving the traffic congestion problem, they’re making it worse.

“So then you're left with a question,” Erhardt summarizes. “What do we do about this?”

Erhardt insists the answer isn’t beating up or blaming TNCs but, rather, understanding the trade-offs.

“In order to craft effective policy, you start by understanding the problem. Then you have to evaluate the effectiveness of the proposals, and that's what we’re trying to do as transportation engineers.”

One of the engineers who contributed to that study was Greg Erhardt.

“What's interesting is that TNCs are actually supportive of congestion pricing,” says Erhardt. “They see that it would affect not only them but also drivers, and if it reduces the number of people in single-occupant vehicles, then it builds their market as well. It actually makes me a little bit hopeful that there's an opportunity for it to move forward.”