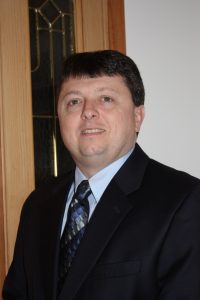 Mike is a native of a rural community in Leslie County, Ky., and a third generation coal miner. He attended Leslie County High School where he graduated with honors in 1988. He attended Hazard Community College for one year and then transferred to the University of Kentucky where he graduated in December 1992 with a Bachelor of Science in Mining Engineering with Distinction. Mike was inducted into Tau Beta Pi, the engineering honor society, while attending UK.

Mike is a licensed Professional Engineer in Kentucky and West Virginia. He served as chair and vice-chair of the University of Kentucky Mining Engineering Foundation board and currently serves on the executive board of that group. He also served on executive boards of Kentucky Coal Association and West Virginia Coal Association and on advisory committees for Marshall University College of Engineering and Boone County Vocational School. Mike is a Kentucky Colonel, a lifetime member of the UK Alumni Association and is a member of UK’s Fellows Society.

Mike’s mining career began with LEECO/James River Coal in London, Ky., as an underground Industrial mining engineer. He was a member of the 1993 National Mine Rescue Championship Team.

Mike joined Arch Coal in 1995 and worked at operations in Kentucky and West Virginia. He held various positions with Arch Coal over a ten year period including production supervisor, superintendent, mine manager, manager of engineering and director of process improvement. While at Arch Coal, he directed the corporate engineering recruiting program with a specific focus on hiring and developing new engineers for the coal mining profession. While mine manager, his operation received the OSM Director’s Award for Excellence in Reclamation.

Mike currently holds the position of senior vice president of WV Technical Services for Blackhawk Mining where he is working on acquisitions, engineering, mine planning, new projects and environmental affairs. Mike is also directly engaged with congressional and state delegations on legislation to benefit the coal industry.

He is involved in his community including major projects to benefit youth and charity organizations including supplying computers, books, and coats to local elementary schools, participating in trout stocking events for local children and serving as a celebrity waiter at the Children’s Home Society of West Virginia. He worked with other community leaders to construct a turf field in Madison, received the 2011 Director’s Award from the West Virginia Coal Festival and also works with local chapters of the National Wild Turkey Federation and Ducks Unlimited.

Mike is married to Jacalyn Day, a UK College of Education graduate. They reside in Madison, W.Va., with their two children, Andrew and Ashley. Mike’s parents, David and Betty Day, are residents of Leslie County, Ky. Mike and his family attend Bible Baptist Church in Danville, W.Va. He enjoys fishing, hunting, traveling with his family and spending time at their Lake Cumberland vacation home.