How did six UK engineering students end up in Anaheim, California to build a playhouse? It all started when UK graduate students Aaron Cole and Amanda Melendez were contacted by their friend and UK graduate Sam Sergent about an event called the Timber-Strong Design Build Competition. Sergent’s then-boss and member of the Kentucky Structural Engineers Association chapter asked Sergent if he could recruit UK Engineering students to participate in the competition. In order to do that, Cole and Melendez first had to make the Structural Engineers Association (SEA) an official student organization at the University of Kentucky.

So, in September 2019, Cole officially registered SEA. Shortly after, Cole and Melendez pitched their idea for the competition for funding during the 2019 Wildcat Cage event, where engineering organizations present funding opportunities to engineering companies. They were granted $1,000 from Preload and the College of Engineering. Apart from that, they also received extensive funding from Preload, Duncan Machinery Movers, Brown + Kubican Structural Engineers, Pyramid Consulting, Simpson Strong-Tie and the state SEA chapters of Kentucky and California. With the funding they received, six students from UK were able to participate in the competition with fully paid, round-trip tickets from Kentucky to California, money for meals and sufficient funds to design, construct and ship their playhouse for the Timber-Strong Design Build Competition. SEA’s advisor, Mariantonieta Gutierrez Soto. accompanied them.

So, what exactly is SEA?

According to the National Council of Structural Engineers Associations (NCSEA), it was “formed to continuously improve the standard level of practice of the structural engineering profession, and to provide an identifiable resource for those needing communication with the profession.” UK’s SEA chapter wants to promote structural engineering awareness through disaster response sustainability, education, publications and outreach.

“We want to encourage the students of UK to put what they’ve learned in the classroom out in the field. In doing so, we participate in the Timber-Strong Design Build Competition. Every year the objective of this competition changes a little bit, whether it be different limitations or different design constraints,” says Melendez.

In last year’s Timber-Strong Design Build Competition in Anaheim, California, SEA students were required to do on-site construction of a pre-designed two-story children’s playhouse that they designed themselves. The focus of that competition was sustainability, structural engineering and cost estimation.

The night before the competition, they practiced constructing the playhouse for more than 12 hours. As night came, the lights on the campus they were practicing on turned off, which forced them to project their U-Haul truck lights to be able to keep practicing. If that had not complicated things enough, their cantilever beam, which was needed for a deflection test during the competition, had been misplaced and they had to cut and size a new one.

“It really teaches you about how it is out in the field. Anything can happen and fall out of place at any time, but you just have to adjust and keep moving,” says Melendez.

Upon arriving at the competition site, students were given 90 minutes to build their playhouse. They then presented their design and construction details to the judges. The UK SEA team went in thinking they would not get recognized, but little did they know things would turn out differently. Later that night, they received news that they had won third place in the competition.

“To be able to be recognized during the Structural Engineering Summit in Disneyland was extremely rewarding,” says Melendez.

Through connections, they found a newly opened Guide Academy School in Anaheim and decided to donate their playhouse.

“It is neat to think that there’s a school in Anaheim, California with a children’s playhouse with a huge University of Kentucky sign and Wildcat figure in their playground. You just never would have thought how much of an impact you could make from across the country,” says Melendez.

SEA students want to continue to participate in future Timber Strong Design Build competitions and plan to offer additional tutoring resources for structural classes at UK. They also intend to foster more outreach at a local level, whether on UK’s campus or with the Fayette County Public Schools. They also hope to continue to see SEA thrive and attract more students to the structural engineering field.

“It really is such a rewarding profession and it deserves more awareness. I’m hoping that SEA continues to participate in the Timber Strong Design Build competition and that they continue successfully representing UK,” says Melendez. 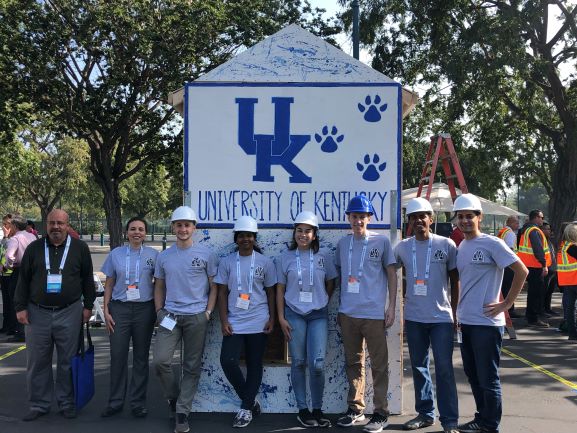