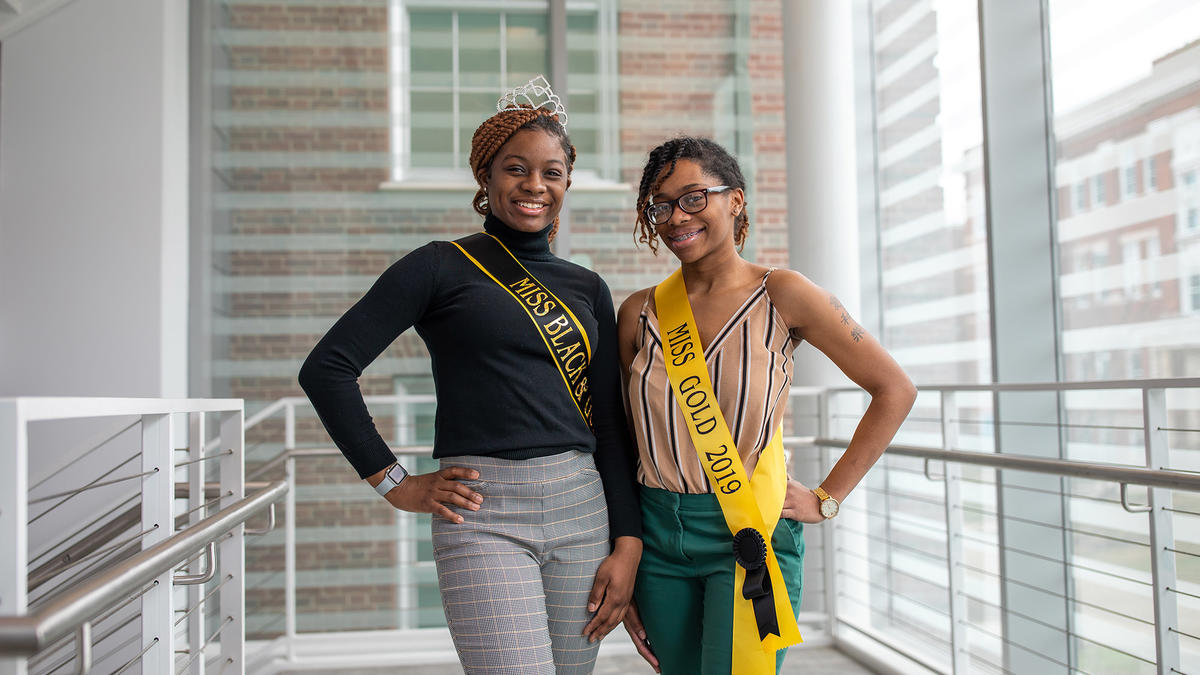 At the 2019 Miss Black & Gold Scholarship Pageant, held December 5, 2019, at Memorial Hall, chemical engineering junior K’Lynn King was named Miss Black & Gold, and electrical engineering junior Savannah Lewis was Miss Gold (first runner-up). K’Lynn is the vice president of the UK chapter of the National Society of Black Engineers (NSBE) and Savannah is the Telecommunications Chair of NSBE, as well as a UK101 peer instructor.

K’Lynn and Savannah’s platforms described how they would advocate STEM education by saying they would create and host events intended to increase awareness and participation in the STEM fields among underrepresented minorities. Now crowned Miss Black & Gold, K’Lynn will be involved in leadership roles on campus and in the community. Learn more about these two outstanding students below.

Staying in Milwaukee, Wisconsin, was not in the cards for K’Lynn King. She knew she had to leave her town to achieve her goal of becoming a chemical engineer. As a first-generation college student, K’Lynn came to the University of Kentucky with the drive to graduate as an engineer and make her family proud. K’Lynn recalls her transition from Milwaukee to Lexington being difficult since she did not know anyone and felt like she didn’t fit in.

Luckily, she was able to find an organization that made Lexington feel like home. Through the National Society of Black Engineers (NSBE), K’Lynn found peers who encourage her and give her a better understanding of what an engineer can look like. Now, she holds the position of vice president for NSBE.

K’Lynn hopes to have her own engineering firm eventually, but first, she will secure her professional engineering license along with an MBA.

For K’Lynn, being named Miss Black & Gold means more than just a scholarship; she wants to prove that women in engineering are capable of doing so much more than people may assume. She believes her platform as Miss Black & Gold is a good way to support children and young adults who are interested in STEM field.

“There are a lot of adversities that are faced while being a minority in the STEM field and I feel that with an effective support system anyone could make it through,” K’Lynn says.

Savannah Lewis, from small-town Thomson, Georgia did not imagine she would end up at the University of Kentucky. It was not until the last couple of months of her senior year in high school that she decided she would join the Wildcat family.

Despite having to leave her own family and move seven and a half hours away from home, she knew college was her path to a brighter and successful future. From a young age, Savannah has always been amazed by how electricity and electronics work. She remembers seeing computers and wanting to take them apart just to inspect the inside. Even trying to figure out why light switches only moved up and down and no “dim” in-between caught her attention. Little did she know this was the start of her path to becoming an electrical engineer.

Since arriving at UK, Savannah has always involved herself on campus. She is the telecommunications chair for the National Society of Black Engineers (NSBE), the co-founder for UK Energy Club, a UK101 peer instructor, a UK Service Corps volunteer and a teacher’s assistant. She also interned with Lockheed Martin Space Systems and the University of Missouri Undergraduate Research Program.

Savannah’s life-long goal is to become a U.S. astronaut, which she plans to pursue by completing her undergraduate degree and earning her master’s degree in astrophysics.

For Savannah, being named Miss Gold is a way to demonstrate that women do not have to fall into the normative beauty standards to be able to flourish and show their full potential.

“I used this chance to bring awareness to the lack of minority women in STEM fields. It also gave me a chance to show people that engineers are not all the same and that we are capable of much more than meets the eye,” she says.