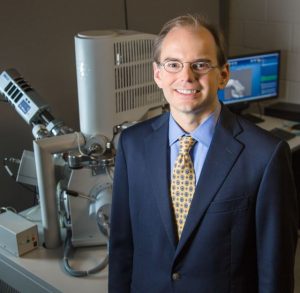 ECE faculty member J. Todd Hastings has received a new award from the Department of Energy to study nanoscale magnetic materials called artificial spin ices. These engineered materials are formed from magnetic wires over ten thousand times thinner than a human hair. Hastings’s team will use the shared facilities in UK’s Center for Nanoscale Science and Engineering to create patterns of these wires that are magnetically “frustrated,” that is, they will not easily relax into a simple, lowest-energy configuration. Understanding these processes may allow artificial spin ices to be programmed into useful states that perform computations or control x-ray beams. Controlling the time scale for relaxation will allow engineers to meet design requirements for switching stability, speed, and energy consumption. In addition, Hastings and collaborators have observed an interesting interaction which might allow researchers to transfer orbital angular momentum to x-ray beams scattered from these materials. Programmable x-ray vortex beams could enable novel nanotechnologies such as optical trapping and rotation of molecules, nanoscale rotational sensing, and new quantum computing paradigms. The work will be conducted by University of Kentucky researchers from electrical engineering and physics, along with collaborators at Lawrence Berkeley National Laboratory and Argonne National Laboratory.