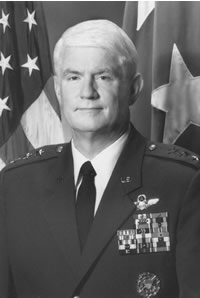 Henderson, Kentucky native John H. Campbell received a Bachelor of Science degree in Computer Science from the University of Kentucky in 1969. As an undergraduate, he participated in the UK Reserve Officer Training Corps program. After graduation, he received his commission into the United States Air Force and pursued graduate studies at the University of Kentucky earning a Master of Business Administration degree in 1971.

General Campbell’s illustrious military career has spanned more than thirty years during which he has risen to the rank of Lieutenant General. He is a command pilot with more than 3,600 flying hours and has commanded a fighter squadron, fighter group and two fighter wings.

He first flew as a T-38 instructor pilot at Williams Air Force Base (AFB), Arizona. He spent the next three years in this same capacity at Randolph AFB, Texas. After being selected to fly the F-15 fighter, he was assigned to Langley AFB, Virginia with the 71st Tactical Fighter Squadron. His next assignment was as an F-15 instructor pilot with Royal Saudi Air Force at King Fahad Air Base, Taif, Saudi Arabia. Following an assignment to the Air Staff at the Pentagon, he returned to operational flying with the 49th Tactical Fighter Wing, Holloman AFB, New Mexico. He next commanded the 57th Fighter Interceptor Squadron, Keflavik Naval Air Station, Iceland.

After graduating from the Air War College, Maxwell AFB, Alabama, General Campbell moved to Bitburg Air Base, Germany where he served as commander, 36th Operations Group. His next commands included the 31st Fighter Wing, Aviano Air Base, Italy and then the 325th Fighter Wing, Tyndall Air Force Base, Florida. Brigadier General Campbell was next assigned to the Operations (J3), Joint Staff, Pentagon where he served as both Vice Director of Defense Information Systems Agency (DISA) and first commander of the Joint Task Force on Computer Network Defense (JTF-CND).

As JTF-CND commander, Major General Campbell was responsible for protecting the Department of Defense’s (DoD) computer networks and systems from intruders and other attacks. The JTF-CND monitors incidents and potential threats to DoD systems. It also establishes links with other federal agencies through the National Infrastructure Protection Center to share information on activities across the information infrastructure. When attacks are detected, the JTF-CND is responsible for directing DoD-wide recovery actions to stop or contain damage and restore network functions to DoD operations.

General Campbell was appointed Associate Director of Central Intelligence for Military Support, Central Intelligence Agency in June 2000. In this role, he serves as the CIA Director’s principal adviser on all military matters. He is charged with ensuring proper intelligence community support to the armed services across the spectrum of research and development, acquisition, plans, training and operations. He also coordinates CIA activities in support of military activities and oversees the CIA’s Office of Military Affairs.

After confirmation by the U.S. Senate in October 2000, he was promoted to the rank of Lieutenant General. Since his arrival at the CIA, General Campbell is credited with actively pursuing ways to enhance collaboration between the Department of Defense and the intelligence community. He has won praise for seeking out tough missions and excelling at them. His impressive breadth of knowledge and experience in the fields of intelligence and the military help ensure the superiority of the U.S. military’s intelligence capabilities.

General Campbell and his wife, the former Marc McDaniel, reside at Andrews Air Force Base, Maryland. The couple has three children, Rachel, Elizabeth and Matthew.