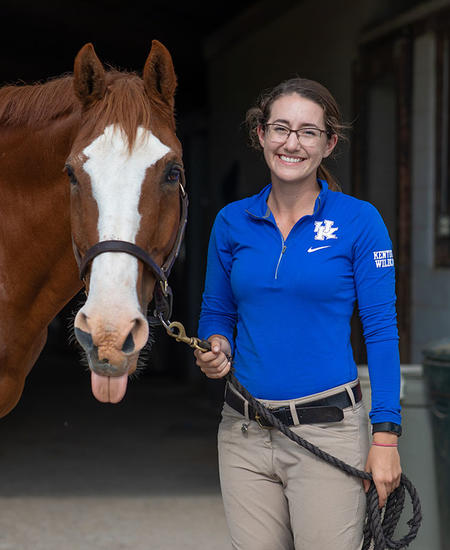 The only way that our research will be helpful is if we communicate the scientific results to the right people in a way that makes sense.

“I do physics problems using aerospace methods and then apply it to horses.”

If that sounds complicated to you, welcome to Shannon Wood’s world.

“In the equestrian sport of eventing, there’s a phase called cross-country, where they jump solid objects like tree trunks and picnic tables,” Shannon explains. “In show jumping, when the horses make a mistake and bump the poles, they just fall. But if the horse makes a mistake in cross country, the stakes are much higher.”

Hitting the solid objects can cause horses to somersault over landing on their back and sometimes the rider, in what equestrians call "rotational falls," which can injure and even kill the horses and riders. After notable numbers of fatalities in the late 90s, field experts began to seek ways to increase course safety. Though they initially used general testing tools such as crash dummies, they quickly realized the need for more precise methods.

In the midst of this horse world, Shannon’s engineering knowledge plays an unexpected and significant role.

She and her team are developing a model that will take into account the various shapes and sizes of horses. Using the Monte Carlo method—named after the gambling town for its usage of distributions—the team can calculate a horse’s inertia based on its measurements. With their distribution, experts in the field may one day no longer need to experiment with expensive dummies that only account for few horses.

In addition to presenting annually for their grant donors, Shannon and Professor Smith presented their findings to the United States Eventing Association at their 2016 conference in Fort Lauderdale, Florida. They plan to present again this year.

“While we were there, as I was looking around the conference room, I noticed several hands with Olympic rings on them. That was so surreal,” she says.

What does Shannon’s work look like on a daily basis?

“I write a lot of code,” she laughs. “But I get to interact with horses too, and that’s my favorite part.”

Initially she obtained horse measurements for the distributions via an online survey, through which people can measure their own horses and submit those numbers. But to supplement those numbers, she has measured over 250 horses in person.

“I measure their height with a big L-shaped measuring stick, as well as the lengths and circumferences of their bodies, necks, and heads. I then use that information to make my models representative of the horses that are actually competing right now,” says Shannon.

But Shannon’s experience with horses extends far beyond this. Growing in St. Louis, she began riding at age 13; she came to Kentucky for college because she wanted to find a way to merge her love of calculus and physics with the horse world. She still rides nearly every day in her free time, and she works at Ashley Kehoe Eventing at Antebellum Farm.

Has her knowledge of the horse world been helpful throughout the research process?

“Definitely,” she says. “The only way that our research will be helpful is if we communicate the scientific results to the right people in a way that makes sense. Being that person in the horse world has helped me know.

After she graduates in May 2019, Shannon plans to keep finding ways to merge the equestrian and engineering worlds, and she aspires to own her horse as well.

“I’d like to stay in Lexington if possible,” says Shannon. “It’s been perfect for me, since I can be to the farm in 25 minutes and still have a city to do things in. What more could you want?”

If you own or ride a horse and would like to contribute its measurements to Shannon’s study, go here.