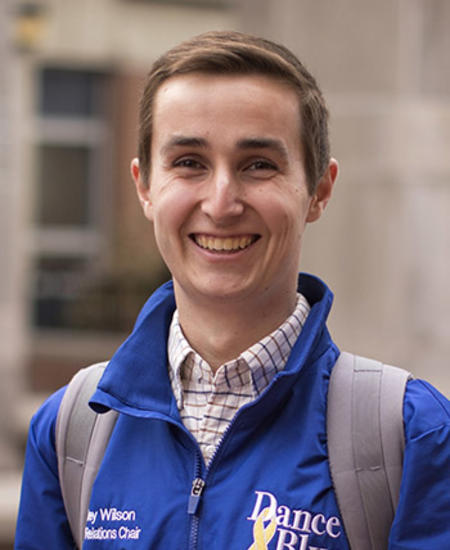 Given the opportunity, I feel like I really have to give back. To me, I don’t see any other option.

UK junior Bradley Wilson has experienced the impact of DanceBlue first hand – as a two-time pediatric cancer survivor. Now he’s leading the fight against cancer on the floor as part of DanceBlue’s student leadership.

Most UK students learn about DanceBlue through friends on campus, sessions during orientation or by participating in one of the dozens of mini-marathons hosted by elementary, middle and high schools across the Commonwealth. However for UK junior Bradley Wilson, his knowledge of DanceBlue comes from hands-on experience.

Wilson is a two-time childhood cancer survivor and received treatment at the Kentucky Children’s Hospital DanceBlue Hematology/Oncology Clinic for the last time just a few years ago.

“Being a patient, it was really awesome having DanceBlue people around,” Wilson said. “Having friends at the clinic to just hang out and pass the time was a really big encouragement to me.”

Upon his arrival on campus, Wilson knew DanceBlue would be a big part of his campus experience. He has been involved with DanceBlue since his freshman year - dancing and serving on committtee. This year, he’s taken on a bigger leadership role – the family relations chair.

As the DanceBlue Family Relations Chair, he and his coordinators work with the clinic staff to make sure children in treatment at the clinic enjoy their childhood despite their diagnosis. They are the face of DanceBlue in the clinic – the friends there to hang out with and encourage patients.

"To have that perspective on what it's like to be a patient and to experience what their experiencing but then also see how I can give and serve and try to make their lives a little bit easier,” he said, “is a unique position to be in.”

Wilson, a chemical engineering major from Simpsonville, Kentucky, enjoyed seeing the family relations committee volunteering while he was receiving treatment during his freshman year at the KCH DanceBlue Hematology/Oncology Clinic. Seeing college students come and support the patients receiving treatment made him want to participate in DanceBlue as soon as he could.

“I’m not sure that they knew that the support system they provide is vital to the journey to recovery,” he said.

“Empathy is a big part of it … there's a certain level of understanding that comes with surviving cancer,” Wilson said. “Being able to say I've been in a similar situation, I've been through very similar things and I can understand to some extent what you're experiencing and that it’s okay to not be okay.”

That’s what DanceBlue brings to the clinic.

The family relations team along with other DanceBlue leadership volunteer their time in the clinic playing games, talking with families and engaging in the occasional Nerf gun war. The students do anything they can to make the children and families more comfortable while they’re receiving treatment.

“There's so much that I love about DanceBlue,” Wilson said. “From being at the marathon seeing the talent show when he kids get on stage and perform to being in the clinic and getting to spend time with families and play games and goof off, it's a lot of fun.”

DanceBlue is a year-long fundraising and volunteer effort that supports the Golden Martix Fund, cancer research at the Markey Cancer Center and the the families of children receiving treatment for pediatric cancer at the Kentucky Children’s Hospital DanceBlue Hematology/Oncology Clinic. DanceBlue culminates in a 24-hour no-sitting, no-sleeping dance marathon. Nearly 900 dancers  participated in DanceBlue 2018.

“One of the biggest things that we like to point out is that DanceBlue isn't something that's passed down from administration,” Wilson said. “DanceBlue grew from the student body, and that shows a lot about the people on this campus. For many people I've talked to that are on DanceBlue committee now, it was a part of the reason that they came to UK.”

The community that DanceBlue creates unites students from all backgrounds, organizations and experiences – all bonded for a common cause – the kids.

"Given the opportunity, I feel like I really have to give back,” Wilson said. “To me, I don’t see any other option.”

This spotlight was adapted from an article in UKNow. The full article and accompanying video can be found here.