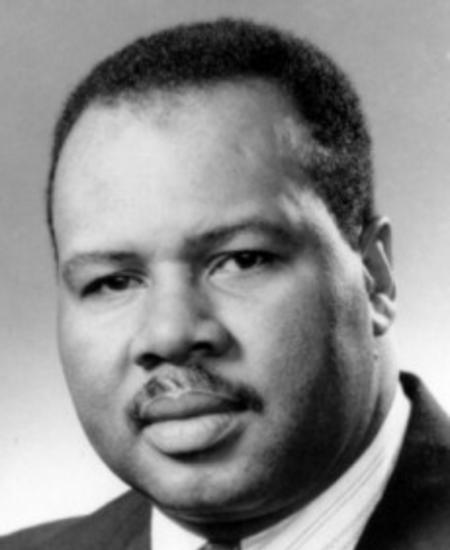 After Lyman T. Johnson’s successful challenge to desegregate the University of Kentucky, Holloway Fields Jr. began studying engineering at UK. At the time, he did not realize his enrollment represented a milestone in the University’s history.

Fields graduated from old Dunbar High School, where he was class valedictorian, president of the Student Council and captain of the football team. He served in the U.S. Navy at the end of World War II, then decided to pursue studies in electrical engineering. Because Kentucky state law prohibited African Americans from attending UK, he enrolled in the Illinois Institute of Technology.

After Lyman T. Johnson’s successful challenge to desegregate the University of Kentucky, Fields transferred home to begin classes at UK. At the time, he did not realize his enrollment represented a milestone in the University’s history. Only at the time of his graduation did Fields realize the magnitude of his accomplishment.

Fields related that while he was not treated badly by his classmates or professors in the College of Engineering, he did face other forms of segregation at UK and in Lexington. Fields was not allowed to eat in any of the on-campus food facilities, he could not attend football and basketball games and he could not eat in many of Lexington’s restaurants nor try on clothing in most department stores.

After graduation, Fields became a test program engineer with the General Electric Company. Throughout his years at General Electric, Fields held positions characterized by increasing technical and managerial responsibility. Because of his solid background in design and development, particularly in the area of radar engineering, Fields spent his early years with the company engaged in classified government-related work. He made significant contributions in the area of analysis and equipment construction concerning controls, displays, printed circuit design, signal processing and automatic detection techniques using tubes and solid-state implementations.

As a technical manager, Fields’ department was responsible for the development and implementation plans covering the performance, cost and scheduling of all levels of testing, including identifying and assigning responsibility for test equipment, test facilities, test documentation requirements and equipment design change control. From this work came more than a dozen successfully deployed system types for more than 500 systems at installations for field sites.

Professionally active throughout his career, Fields held membership in the Institute of Electrical and Electronics Engineers, the Syracuse Chapter of the General Electric Elfun Society, the American Defense Preparedness Association and Sigma Xi honor society. He was well known within the Syracuse area for his dedicated work in several community organizations as well as his church.

Fields received many awards and honors in recognition of his professional and civic contributions, including the Syracuse Black Leadership Congress Award, the Onondaga County City-County Human Rights Commission Award and the University of Kentucky Lyman T. Johnson Alumni Association Award. He was inducted into the UK College of Engineering's Hall of Distinction in 1998, and he was posthumously inducted into the UK Alumni Association's Hall of Distinguished Alumni in 2015.

Holloway Fields Jr. died February 24, 2006. He was married to the former Harriet M. Walker of Lexington. The Fields’ were parents to five children: Howard, Jerome, Audrey, Ralph and Calvin.