Alexa Eggert (B.S. in Computer Engineering, 2011) is bringing a passion for serving her country and a problem-solving mindset to the US military’s newest frontier. 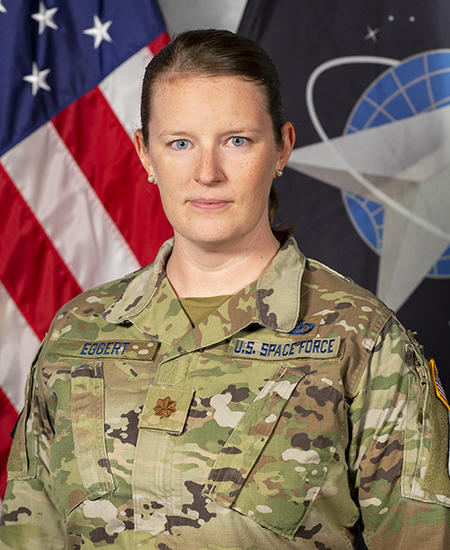 When Major Alexa Eggert, wears her military uniform around Chantilly, Virginia, just outside Washington D.C., most citizens don’t raise an eyebrow. Up close, however, some express surprise over what makes her uniform unique: opposite “EGGERT” is a blue patch that proudly proclaims: SPACE FORCE.

“Is that real?” people sometimes ask.

“Yes, it’s real,” Alexa might reply, “And it’s been needed for some time.”

Formally founded in December 2019, the Space Force’s mission is to "provide freedom of operation for the United States in, from, and to space" and "provide prompt and sustained space operations," as well as "protect the interests of the United States in space, deter aggression in, from, and to space, and conduct space operations.” For the average citizen, however, the Space Force is shrouded in mystery.

“I imagine this is similar to how a lot of people felt in 1947, when the Air Force was established,” surmises Alexa, who joined the Space Force earlier this year after 10 years of active duty in the Air Force. “People were asking, ‘Why do we need this?’ And now look at how much the Air Force provides not only to our country but the world. The Space Force is a branch that will touch all the other services and components.”

Despite the change in affiliation, Alexa’s role in the Space Force is largely identical to where she was serving in the Air Force. As a program manager supporting the National Reconnaissance Office, she oversees the cost schedule and performance of programs and systems. With her bachelor’s degree from UK in computer engineering augmented by a master’s degree in human factors engineering from Wright State University, Alexa brings a combination of technical know-how and in-depth understanding of how people interact with technology to her role.

“It's a little odd to have a program manager who is mainly responsible for producing certain outcomes who also understands the technical side. It really helps when I’m reading contracts and working with defense contractors, because I can grasp what they're telling me rather than relying on others to give it to me second-hand,” says Alexa.

Born in Germany, Alexa grew up with a first-hand view of military life. Her father was an active-duty serviceman and her family moved often. While at UK, Alexa saw an advertisement for (ROTC, Army?) that challenged her to do something bigger than herself. She, too, fell in love with the idea of serving her country.

“I love putting on the uniform every day,” Alexa says enthusiastically. “Obviously, it’s different than going to battle. When I went to Afghanistan, I wasn't holding a weapon, so it's a different aspect, but there's just something about not only serving your country but also striving toward the future. There are more aspects to the military than serving and protecting. We’re trying to lean forward into what the future holds for humanity.”

It’s hard to imagine leaning much more forward than into space. Fortunately for Alexa, her career thus far has sufficiently prepared her for this bold, new adventure. Throughout her posts at Wright-Patterson Air Force Base in Dayton, Ohio; Los Angeles Air Force Base and Afghanistan, Alexa has learned how technology emerges from the research laboratories, as well as how warfighters put it to use. Along the way, she would look survey her colleagues and realize she was one of a small number of people who didn’t have one or two Ph.Ds. However, Alexa says her education at UK gave her a solid footing for her chosen career path.

“Without my classes on algorithms and coding, I wouldn’t have made it through my first four years. I would have had to find a different job. That’s why I encourage anyone attending UK or any other school to take as many STEM classes as possible. If you can work through engineering problems, you have the capability to work through any problem.”

Because Alexa’s parents live in Versailles, Kentucky, just a short drive from UK’s Lexington campus, Alexa returns to campus on occasion, where she relives treasured memories and visits with the faculty and staff members who made an indelible impression upon her as an undergraduate.

“I have so many amazing memories from UK. Being part of the Air Force ROTC detachment opened opportunities that are not part of the average college student’s experience. For instance, I got to present the colors during the national anthem during basketball games and football games. Those are just moments I'll never forget,” Alexa recalls. “When I think of faculty and staff members who made an impact, I am so grateful to Dr. Aaron Cramer, Ilka Balk, Regina Hannemann, Jeff Ashley and my advisor, Danielle Hinkle-Green, without whom I surely would not have graduated!”

For recreation, Alexa enjoys hiking, reading and playing the flute—an instrument she played while a member of the UK marching band. She also confesses to be a Peloton addict. Alexa has created a #BBN tag that now has 291 members.

“Ending up on rides with Kentucky fans around the country and world is always a joy,” she says.

While Alexa has served on active duty for 10 years, she is eager to spread the word that enlisting is not the only way to serve the US.

“There are opportunities for you in civil service, where you can make a great impact by bringing new technologies to our warfighters. I don't think a lot of people realize that that's an option, but you can influence the rapidly changing future of our military branches as a civil servant. If that sounds interesting to you, all our service pages have information about how to start a career in civil service.