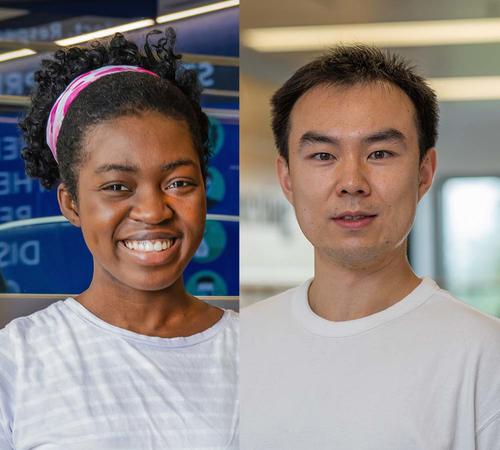 Max-Onakpoya and Liu are the 10th and 11th Halcomb fellows since alumnus F. Joseph Halcomb III, M.D. (BSME 1974) initiated the program. Halcomb fellowships consist of an annual stipend of $30,000 with the option of renewal for a second year based upon the research progress of the recipient.

Esther Max-Onakpoya is the fourth woman and second Black woman to receive a Halcomb fellowship. Her project is titled “Designing Private and Trustworthy Opportunistic mHealth Applications for Symptom Management in Rural Cancer Patients,” which aims to evaluate and improve header privacy in hybrid Delay Tolerant Networks for healthcare without adversely affecting network performance in real-world and simulated environments. Her mentor is Corey Baker, assistant professor in the Department of Computer Science. Her mentor in the College of Medicine is professor Timothy Mullett, M.D.

Max-Onakpoya came to UK from Nigeria to begin undergraduate studies in 2013. She began pursuing a Ph.D. with Baker as her advisor in 2018. She says working on research that can positively impact the quality of healthcare in the near future is exciting.

“I hope to work in the emerging Mobile Health industry, making technologies that improve patient outcomes.”

“I feel grateful and extra encouraged to put in my best in doing research this year.”

Max-Onakpoya says she has found a home at UK.

“I like the Lexington community because people are really friendly. I have also really loved the opportunity to get to know people.”

Xuhui Liu’s project is titled “A Wireless Wearable Optical Sensor for Continuous Monitoring of Cerebral Blood Flow and Oxygenation in Freely Behaving Subjects,” which seeks to develop and calibrate a wireless diffuse speckle contrast flow-oximetry (DSCFO) device with wearable head probes and evaluate their performance. His mentor in the College of Engineering is professor Guoqiang Yu and his mentor in the College of Medicine is professor Kathryn E. Saatman.

Liu, from China, earned his bachelor’s degree in electrical engineering in 2018 and joined Yu’s Biophotonics Lab the same year. He enjoys being at UK and living in Lexington.

“I think UK has a well-organized system to support Ph.D. students like me and help us conduct our research plan as expected. For example, as a BME student, I usually need to work with a surgeon to validate our monitoring device on animals and patients. With support from the hospital and the College of Medicine, we can effectively recruit patient subjects and do the measurement to test our device, which save us a lot of time.”

Despite his serious work, Liu is right at home within UK’s basketball culture.

“I enjoy the Johnson center and its basketball courts. I like playing basketball for fun. I am one of the organizers of the Chinese basketball club and we have a game almost every week. I also like hiking, kayaking, and skiing.”

Liu’s long-term goal is to become an independent scientist and a leader of multidisciplinary research in the field of biomedical engineering.

“The ultimate goal of my project is to translate and apply these novel optical techniques to the clinic and improve the healthcare system and benefit both patients and doctors.”

In 1980, Dr. Halcomb joined Zimmer, a world leader in orthopedic and surgical products. Five years later he became vice president of product development, leading the development of joint replacement implants that revolutionized the industry. By 1993, he was president of Zimmer’s Hall Surgical Division. In 1995, he was recruited by biotechnology company Amgen to apply his medical device expertise in building a venture in cell therapy. Within a decade, Halcomb became Amgen’s vice president for drug product and device development and directed a team that launched revolutionary products and expanded the company’s reach worldwide.