Doerge currently serves as the senior director of Advising and Student Success in the College of Engineering and works with the Scholars in Engineering and Management (SEAM) Honors pathway students. 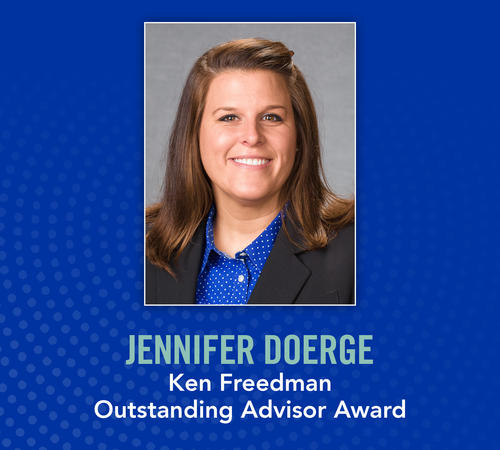 The University of Kentucky Advising Network has recently announced the recipients of the 2021 Ken Freedman Awards during the Ken Freedman Day of Recognition virtual awards ceremony.

Awardees received a $500 monetary award from UK Student and Academic Support, a unit of Student Success. Awardees in all categories are also nominated by the UK Advising Network for the Region 3 and National NACADA (academic advising association) awards.

Riggs Doerge started at UK in 2006 as an account manager in the computer science department where she discovered her true calling: academic advising. Riggs Doerge had a close mentor who helped mold her into the advisor she is today, her mother, Jane Riggs, who worked for years in the College of Engineering as the advising director.

As a freshmen advisor, Riggs Doerge is grateful to play an instrumental role in helping students transition from high school to college. She is proud that many keep in touch as they progress through their majors and even after graduation.