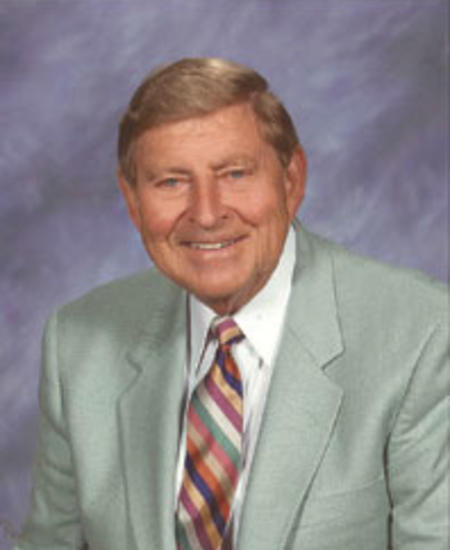 Calvin Grayson (BSCE 1949), who established the Kentucky Transportation Center and served as its director from 1983-2004, passed away July 4, 2020. Mr. Grayson was inducted into both the UK College of Engineering's Hall of Distinction and the UK Alumni Association's Hall of Distinguished Alumni. His full obituary is below.

Calvin Grayson, 95, former Kentucky Transportation Secretary and visionary planner whose career in transportation spanned nearly seven decades working for eight Kentucky governors, left us peacefully at his home on July 4, 2020. Born September 25, 1924, in Woodford County, he was the only child of the late Birchard Garr and Mary Beckham Hellard Grayson. He was a lifelong resident of Lexington and a graduate of Lafayette High School. He attended the University of Kentucky from 1941 to 1943, when he withdrew to enter the armed forces. Upon completion of basic training, he was selected for specialized engineering training at the University of Chicago. After the Battle of the Bulge in Europe, the training program was discontinued and he was assigned to the 96th Infantry Division on the west coast, a unit known as the “Deadeyes”. He was involved in two major beachhead invasions, at Leyte in the Philippines and Okinawa. A purple heart recipient, he was wounded at Okinawa and hospitalized for 16 months.

While Secretary he established the Kentucky Transportation Center at the University of Kentucky and served as its director from 1983-2004, the capstone to his legacy in the transportation world. His long, illustrious career was marked by his philosophy of looking at business processes and practices to ensure that continuous quality improvement, knowing that changes may be in order. He was recognized as the change agent that moved the highway department from a single modal agency to a multimodal transportation agency, a significant shift in thinking and organization. Calvin worked tirelessly for over 50 years to secure the 2006 passage of the primary seatbelt law for the Commonwealth of Kentucky. He was passionate about the need for the law and that it was right for Kentuckians. He never wavered from being the public voice in obtaining its passage. His leadership has been widely recognized by professional organizations such as the Council of University Transportation Centers as well as in the transportation community at the National Level.

During his career, he was recognized as one of the Top Ten Public Works Leaders by the American Public Works Association (APWA). He also received the S.S. Steinberg Award from the American Road and Transportation Builders Association for his outstanding contribution to transportation education. In October 1994, Calvin was awarded the APWA Donald C. Stone Award for outstanding and meritorious achievement in assisting in continuing graduate education for public works professionals. In 2013 he was awarded the Thomas H. MacDonald Memorial Award for continuous outstanding service over an extended period of time or an exceptional contribution to the art and science in Highway Engineering. He is the recipient of many other awards to include the outstanding Engineer in Government Award from the Kentucky Society of Professional Engineers; Outstanding State Vice President of the Junior Chamber of Commerce; Eminent Engineer by Tau Beta Pi; and the Career Achievement Award by UK’s Department of Civil Engineering. Calvin has served as President of the Kentucky Society of Professional Engineers (KSPE); the Kentucky section of the American Society of Civil Engineers and the Council of University Transportation Centers; he was active with Chi Epsilon, a national civil engineering honor society. He has been inducted into the Transportation Hall of Fame, the Lafayette High School Hall of Fame, The University of Kentucky Hall of Distinguished Alumni and recognized by the United States Department of Transportation as one of the Top 100 Public Works Officials in the 20th Century. In honor of his 90th birthday, Mayor Jim Gray declared Calvin the first Henry Clay Ambassador in recognition of his lifetime work to improve the lives of people in Kentucky.

Calvin was married for 61 years to the late Virginia (Ginny) Davidson Grayson, the love of his life. They have two daughters, Tanya Gay Grayson (deceased) and Jana Phillips Grayson. Two grandchildren, Kendra White Shumate and Trevor White, and one great-grandchild, Cooper White. He loved God, family, life, and friends. His warm and contagious smile always warmed up any room he entered. One of his favorite quotes was “it is not our job to fix or judge people. It is our job to love people. The rest is in God’s hands.”

Due to public health restrictions, there will be a private burial in Lexington Cemetery. In honor of his legacy, memorial donations may be directed to Crestwood Christian Church (1882 Bellefonte Drive) where he was a longtime member, Elder, and Stephen Minister or Bluegrass Hospice Navigators. There will be a virtual Celebration of Calvin’s Life on his birthday, September 25th. Please contact his daughter Jana at jpgrayson@hotmail.com to be included in the celebration and distribution of materials. Honorary pallbearers: James Codell, Don Kelly, Mike Hancock, Joseph Crabtree, Patsy Anderson, Issam Harik, Charles (Buzz) Mattingly, and Charles White.

The Kentucky Transportation Center has created a tribute page on their website that you can visit here.