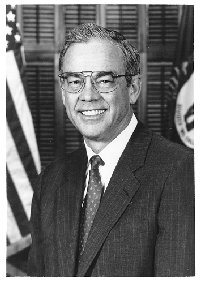 A native of Fallsburg near Louisa in Lawrence County, Kentucky, Paul E. Patton graduated from the University of Kentucky with a Bachelor of Science degree in mechanical engineering in 1959.

After graduation he began his professional career in the mining industry in Floyd County .

In 1979 Patton embarked upon a new career path accepting the call of public service. In 1979 and 1980 he served briefly as the Deputy Secretary of the State Transportation Cabinet in the administration of Governor John Y. Brown, Jr. He also served as Chairman of the Kentucky Democratic Party from 1981 to 1983 at the request of Governor Brown.

In 1981 he was elected County Judge Executive of Pike County , Kentucky where he served for 10 years. In that capacity he exhibited determined political leadership by successfully securing the adoption of the first universal mandatory county-wide solid waste collection program in Kentucky . He also earned a reputation as a no-nonsense public administrator, concentrating on the construction of rural roads, recreation facilities, county buildings, and economic development efforts.

Patton was elected as the state’s 59th governor in 1995, a race in which he was considered the underdog by most political pundits in the Commonwealth. He immediately set out to improve the economy and education in Kentucky, the two rails of that railroad he envisioned that would lead Kentucky to a brighter future. The passage of House Bill 1, the comprehensive restructuring of postsecondary education in Kentucky was the highlight of his eight years of service which saw Kentucky make significant progress on many fronts including worker’s compensation, juvenile justice, domestic violence and child abuse prevention, historic preservation, and infrastructure construction.

He is in semi-retirement in Pikeville where he serves as a Distinguished Visiting Lecturer in Public Policy and Leadership. He is married to the former Judi Conway of Pikeville.

They have four children: Nicki Patton, Chris Patton, Jan Harvey Johnson, Jr. and Bambi Todd. He is a member of the First Presbyterian Church of Pikeville, the Big Sandy Regional Economic Development Board and chairman of the Pikeville/Pike County Industrial and Economic Authority. He and Judi have been U.K. Fellows for many years.

Patton was inducted into the College of Engineering Hall of Distinction in 1997.